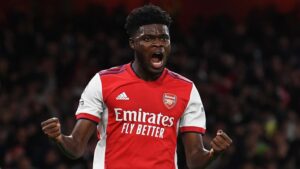 Thomas Partey was delighted to finally net his first Arsenal goal on Friday night, saying he’s been ‘waiting for this moment for a long time,’ but club legend Ian Wright wants to see him score a lot more regularly from now on.

Partey opened the scoring in Arsenal’s encouraging 3-1 win over Aston Villa at the Emirates, a result which saw them climb into the top half of the table and put their dismal early season form further behind them.

The Ghanaian had previously made 39 appearances for the Gunners without scoring, but he finally broke his duck as he nodded in a header from a corner in the first half.

The 28-year-old was delighted to get the win after two frustrating draws in the Premier League and he was relieved to score, knowing he should be contributing more goals from midfield.

‘All the team was frustrated and we wanted a win,’ Partey said via The Mirror. ‘That was the mentality we brought to this game today and we were able to get our result.

‘I’ve been waiting for this moment for a long time. I think it was the right moment to have it and I’m very happy.

‘The team performed very good. We have to do this every weekend and every game and with this, we can achieve beautiful things.

‘They deserve it. they have been supporting us when we have been down and when things have gone bad. This win is for them and I hope they enjoy it.’

YOU MAY ALSO LIKE:   Peter Obi To Critics: My Trip To Egypt Was Scheduled Before Party Primaries

Wright, who scored 185 goals for Arsenal, was pleased for Partey, but feels he should be contributing more in terms of goals.

The Gunners had scored just seven goals in eight Premier League games before Friday night and Wright wants the likes of Partey, Emile Smith Rowe and Bukayo Saka to be scoring more often.

YOU MAY ALSO LIKE:   Prince Fuhad Oloto Gives Out Education Accessories To Indigent Students

‘He [Partey]’s somebody that he’s been shooting from some crazy places, so he was desperate to get his goal. I’m quite pleased that he finally got it,’ Wright told Premier League Productions.

‘I would like to see him getting more goals because Arsenal are going to need more goals from the midfield.

YOU MAY ALSO LIKE:   APC Postpones Presidential Screening Indefinitely

It was a satisfying night for Arsenal, with Aubameyang and Smith Rowe scoring the other goals as they climbed to ninth in the table with the win.