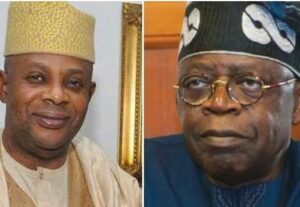 Society gazette reports that Hon James Abiodun Faleke has debunked news making rounds that he insulted the national leader of the All progressive congress (APC), Asiwaju Bola Ahmed Tinubu as reported in some national dailies that include Daily Independent.

In a statement sent to Society gazette by Hon Faleke’s media team, it was noted that the astute politician respects Asiwaju and that He is a father figure in his life.

Our attention has been drawn to a malicious piece going round the public space about our leader Rt. Hon. James Abiodun Faleke (MHR, IKEJA FEDERAL CONSTITUENCY) rubbishing the National leader of the All Progressives Congress, Asiwaju Bola Ahmed Tinubu and other notable party leaders in Lagos State.

That story is malicious and it is to defame the integrity and character of Hon. Faleke.

Asiwaju Bola Ahmed Tinubu is a father to Hon. Faleke whom he holds in high esteem and has never done or say anything to tarnish the image of the respected National leader.

We know where all these false fabrications are emanating from and we know why it is coming from them at this time.

We would not have dignified them with a response if not for the unsuspecting public who might be deceived with the false news.

Hon. Faleke has utmost respect for party elders and top ranking members of the Governors Advisory Committee (GAC) in Lagos and will never do or say anything against the top members of the body whose contributions and commitments has taken Lagos state to greater heights.

YOU MAY ALSO LIKE:   BREAKING: 102 year old woman declares to run for President in 2023

We strongly condemn in solid terms and we demand that *daily independent* retracts such story and apologise within 72 hours after which if not done, we will have no choice than to sue the media company for libel.

Going forward, we want to warn all mischief makers to desist from going round to spoil the father and son relationship that exists between Hon. Faleke and our highly revered leader, Asiwaju BAT.

YOU MAY ALSO LIKE:   Mad Woman Burnt to Ashes after being Caught With 3 AK-47 Rifles in Badagry

Let us emphasize that Hon. Faleke will always respect, adore and honour Asiwaju Bola Ahmed Tinubu who is his father and whose help and support has seen him to greater heights politically and in other areas of life.

Hon. Faleke will never deride or despise any leader of the party for whatsoever reason because he believes in their leadership capacity.

Previous Wizkid Replies Seun Kuti After He Told Him To Stop Parading Himself As A Grammy Nominee
Next BBNaija Reunion: Too Much Hatred, Anger, Disrespect – Funke Akindele