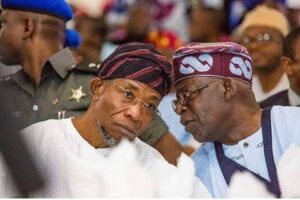 As the feud between Governor Adegboyega Oyetola of Osun State and his predecessor, Ogbeni Rauf Aregbesola, the Minister of Interior festers, there are reports that their political godfather, Asiwaju Bola Tinubu, has thrown his weight behind the governor, raising anxiety in the state’s political cycle.

The fight between Oyetola and Aregbesola over the control of the APC structure in the state has divided members of the party into two camps. Aregbesola’s camp is known as The Osun Progressive (TOP) while the mainstream faction belongs to Oyetola tagged IleriOluwa, the governor’s campaign slogan.

The chairman of the party in the state, Prince Adegboyega Famodun and many prominent party leaders, state and federal legislators, and political office holders are with Oyetola. Majority of those that served in Aregbesola’s government have remained loyal to him and belong to the TOP camp.

The recently concluded ward, local government and state congresses of the party further exposed the depth of the crisis. The minister’s camp has gone to court to challenge the congresses.

Until recently, most people believe that Aregbesola was the determiner of most decisions taken by Tinubu over the years. Tinubu was Aregbesola’s godfather and boss.

Aregbesola served under Tinubu as commissioner for Works in Lagos for eight years and had huge influence in Lagos politics even when he was governor in Osun.

However, Aregbesola’s influence in Lagos politics eventually dwindled when he became minister of Interior after his tenure in Osun.

Oyetola, who served as Chief of Staff under Aregbesola for eight years, is Tinubu’s relative. Some leading politicians in Osun who spoke on condition of anonymity said Tinubu was not happy that Aregbesola did not work for Oyetola’s victory in the 2018 governorship election in Osun and was equally unhappy with Aregbesola’s political moves in Abuja.

YOU MAY ALSO LIKE:   Bola Tinubu, a Man Hated for Loving his People

APC members in the IleriOluwa and TOP acknowledged that Tinubu is supporting Oyetola in the crisis between the governor and Aregbesola. Those that spoke with our correspondent pleaded anonymity.

One of the leaders of TOP said; “Asiwaju Bola Tinubu is supporting Oyetola against Aregbesola. It is expected. It’s normal for him to support his brother. They want to cut Aregbesola’s wings because of Oyetola. We don’t know Aregbesola’s offence.

YOU MAY ALSO LIKE:   Angry Nigerian Youth Blast Bode George Says…You Can’t Use our Head again

“Asiwaju Bola Tinubu should play the role of a leader rather than supporting his brother against the minister.”

But a member of the IleriOluwa group said Aregbesola’s issue with Tinubu was not because of Oyetola.

He said “Oyetola was not the reason for the demobilisation of Aregbesola’s structure in Lagos politics. It’s because of his political moves in Abuja to contest for the presidency. It’s not as if Tinubu is supporting Oyetola against Aregbesola.

The Chief Press Secretary to the governor, Mr Ismail Omipidan, declined comment on the issue.

Political observers in the state posit that APC might find it very difficult to win the forthcoming governorship election in the state unless the crisis is resolved and both camps work together.

When contacted, the media aide to Tinubu, Mr. Tunde Rahman, said Asiwaju was committed to amicably resolving the issue between Oyetola and Aregbesola.

He said the matter of 2022 governorship election or the second term of Governor Oyetola is not yet on the table.

“Whatever it is that you say is happening between Governor Oyetola and his predecessor, minister of Interior Ogbeni Rauf Aregbesola, will be resolved amicably. That’s the resolve of Asiwaju Bola Tinubu and what he is totally committed to at present.

“I think Governor Oyetola has demonstrated that he is qualified for a second term by his performance thus far, by the competence and character that he has brought unto the job,” he said.