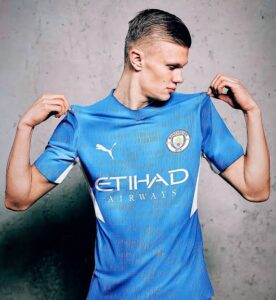 Norwegian professional footballer who plays as a forward for Dortmund, Erling Haaland, has reportedly completed and passed medicals at Manchester City.

The English Premier League top club are keen to receive the 21-year-old striker at the Etihad.

Pep Guardiola’s side is said to have complete all necessary arrangements for Haaland’s move and an official announcement will be made soon.

Haaland has long been linked with a transfer to one of the European elites, but Man City made a smart move for the forward to beat other competitors.

An official announcement is expected to be made before the week runs out.

Reports had claimed Haaland’s contract would be sealed with a payment of around £64m, but according to Romano, the actual cost is a fair bit cheaper, at roughly £51m.

Haaland has scored 85 goals in 88 appearances for Dortmund since his arrival from Red Bull Salzburg back in the January transfer window of 2020. And he now looks set to follow in his father’s footsteps, with Alf-Inge also previously representing City.

With Haaland’s move to City, Guardiola’s side would further be a threat to the likes of Liverpool, Chelsea, Manchester United, Arsenal and more in the chase to win the Premier League in seasons to come.