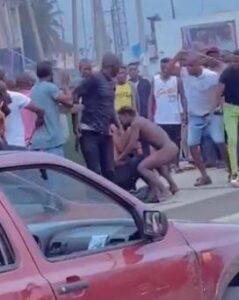 There was a commotion on Wednesday morning at the Choba Junction axis of the East/West Road in Port Harcourt after a man said to be mentally challenged stabbed a pedestrian.

Reports had it that the man perceived to be mentally ill, attacked the pedestrian after he refused to give him a helping hand.

Society gazette understands that the victim is in his early 20s, and was awaiting a shuttle to ferry him to Rumuokoro when the incident happened.

It was gathered that the mentally challenged man said to be popular in the area allegedly approached the young man for money but he ignored him.

Angered by the young man’s action, the said ‘lunatic’ allegedly brought out a knife and stabbed him. The victim immediately slumped and was rushed to the University of Port Harcourt Teaching Hospital where he is currently receiving treatment.

Angered by his action, traders and motorists rushed and descended on the said lunatic a gave him the beating of his life.

YOU MAY ALSO LIKE:   Obaseki: An Ugly Glimpse of What to Come by Yusuf Biliaminu
Trouble As ‘Mentally ill’ Man Stabs Pedestrian Over Money In Port Harcourt 2021-07-07
Oluwasegun Adesuyi
Share