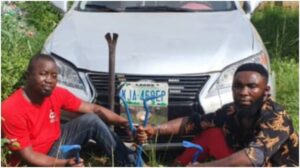 According to a news that was posted by Linda Ikeji Blog this morning, it was alleged that the operatives of the Ogun State Police Command have successfully apprehended two robbers, whose names were given as Fidelis Francis, 28 and Lukman Jimoh, 40, for allegedly robbing a branch of RCCG in Ogun State.

According to what police said concerning their arrest, it was made known that when they received distress call about the activities of the robbers, the D.P.O of Sagamu Police Division, CSP Okiki Agunbiade, mobilized his men to the scene, but the robbers have escaped through the fence before their arrival. When police arrived and were combing the surrounding bush near the church, they saw a Lexus Saloon car with registration number KJA 469 EP, parked at a get away position, which is not too far from the church vicinity.

Police suspected that the vehicle might belong to the suspects, and due to that, they mounted surveillance around it and waited for the owner to come for it, and after waiting for five hours, the suspects came and police apprehended them.

While police were searching the vehicle, two iron bars similar to the ones recovered at the scene of crime was recovered from the car. This further increased their suspicion and the two men were taken to the church, where the CCTV footage was played and the two suspects were seen in the footage as they were breaking into the church.

Previous MURIC gives condition for establishing courts for Christians
Next Oduduwa, Biafra citizens will not be valued like Nigerians” Obasanjo warns agitators