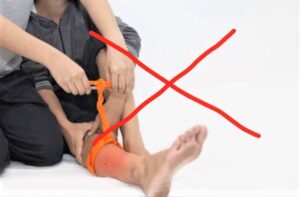 Health experts have cautioned Nigerians against the practice of tying the legs of victims of snakebite with a cloth to stop the movement of the snake venom.

According to the experts, the practice and other crude management of snakebite are fuelling avoidable mortality and morbidity.

One major harmful practice of snakebite management that should be discouraged, according to the experts, is the tying of the leg of victims after snakebite.

They stressed that the practice is fuelling cases of limb amputation.

According to them, victims of snakebite should rather immediately call for help and ensure they are taken to good health facilities for appropriate treatment.

Speaking in an exclusive interview with PUNCH HealthWise, a Consultant Orthopaedic and Trauma Surgeon at the National Orthopaedic Hospital, Igbobi, Lagos, Dr. Bright Igbinoba, said there are things that were done in the past when a person was bitten by a snake that are being discouraged nowadays.

Igbinoba said it is also important to quickly rush a person bitten by a snake to the hospital to avoid orthopaedic effects that could lead to complications and amputation of the limb.

The orthopaedic surgeon explained, “The first thing that should not be done after a person is bitten by a snake is tying something tight around the limb.

“Normally, once a person is bitten by a snake, the limb is swollen. So, as you tie it, it becomes more swollen and blood will not flow into the limb and the limb will die. And once the limb is dead, it will need an amputation.

“Again, the practice of cutting the bite mark of a snake with a razor blade should be discouraged. It has been found to introduce infection.

“Also, the practice of sucking the venom by mouth is also discouraged. It doesn’t really help because the venom can enter the mouth of the person trying to suck it.

“The use of cold compress is also discouraged.”

Igbinoba noted that snakebite might not lead to death or amputation if people get help on time and seek appropriate treatment.

According to the World Health Organisation, snakebite is a neglected public health issue in many tropical and subtropical countries.

The United Nations health agency says about 5.4 million snakebites occur each year, resulting in 1.8 to 2.7 million cases of envenoming (poisoning from snakebite).

“There are between 81, 410 and 137, 880 deaths and around three times as many amputations and other permanent disabilities each year,” WHO says.

Recalled that the Minister of State for Health, Dr.OlorunnimbeMamora, had recently said Nigeria records an average of 15,000 to 20,000 cases of snakebites every year.

YOU MAY ALSO LIKE:   See All Yoruba Obas Supporting Tinubu For 2023 Presidency

Quoting a recent survey, Mamora said snakebites in the country occurred at 479 cases per 100,000 people.

The minister had said, “Nigeria records an average of 15,000 to 20,000 cases of snakebite every year, with about 2,000 people killed and between 1,700 and 2,000 people whose legs or arms are amputated to save their lives after snakebite.

“States with the most cases of snakebite in the country are Gombe, Plateau, Adamawa, Bauchi, Borno, Nasarawa, Enugu, Kogi, Kebbi, Oyo, Benue and Taraba.”

He called for renewed vigour to ensure strong partnerships among member states, development partners, donors and other stakeholders for snakebite management.

Giving insight into snake venoms and their complications, Igbinoba said, “We have the ones that destroy the blood and are very toxic to the blood. Those ones are called the haemotoxins venom or snakebite.

“Snakes with this type of venom, once they bite a person, their venom enters the bloodstream and starts destroying the blood. And the person will start bleeding from the snakebite and can bleed into the internal organs and die from there.

“Then you have the neurotoxic venom. The ones take over the nerves of the body and weaken the person and the person cannot move again.

“The venom will completely take over the person’s nervous system. The last type of venom is necrotizing fasciitis. Now, what do snakes do when they bite an animal or prey, the venoms contain enzymes and so as they inject it into a person’s body, the body starts digesting.

YOU MAY ALSO LIKE:   BREAKING: Gunshots As Suspected Bandits Attack Minna Federal University

“That digestion, what it does is to kill the cells. And that is what causes the limb to start getting rotten.

“It causes it to have a big wound and swell,” he explained.

The physician advised that people should avoid drugs not prescribed by experts when they are bitten by a snake.

“People should immediately call for help once they are bitten by a snake.

The person should be quickly rushed to the hospital.

“It is also important to note the time of the bite so that we can plan and know the speed at which to attend to the patient”, the surgeon counselled.

WHO further says most of the deaths from snakebite occur in Africa, Asia and Latin America.

“In Asia, up to 2 million people are envenomed by snakes each year, while in Africa there are an estimated 435 000 to 580 000 snakebites annually that need treatment.

“Bites by venomous snakes can cause acute medical emergencies involving severe paralysis that may prevent breathing, cause bleeding disorders that can lead to fatal haemorrhage, cause irreversible kidney failure and severe local tissue destruction that can cause permanent disability and limb amputation,” WHO added.