Recently there’s story that former Nigerian youth international golden boy Sani Emmanuel has been off the radar because of a career ending injury, in the published news the player explained how injury forced him to quit the game of football at the time when he should be playing active soccer.

The 26years old Sani Emmanuel scored five goals for the Golden Eaglets in the championship to win the Silver booth after he had won the Golden Ball in a tournament that paraded players like Alvaro Morata and Isco of Spain, Neymar of Brazil, Mario Gotze of Germany and Nigerian internationals Kenneth Omeruo and Ramon Azeez, and was forced to call it quit with football just four years into his playing career due to an hamstring injury.

Sani who recently took to the social media to solicit for support from Nigerians to enable him operate on his unhealed leg injury (Achilles Tendonitis) that has kept him bedridden for so long, since he had depleted the money he made during the four years he spent as a player for Beitar Jerusalem of Israel.

According to a story published by Evangelist Johnson Bisola Hephzi-bah on her blog, she shed light on the relationship between the General Overseer of Synagogue Church of all Nations (SCOAN), Prophet T.B. Joshua and the injured player whose fame during his playing days for the Golden Eaglet of Nigeria had been harnessed for publicity to the advantage of the pastor.

In her right up, she explained that the boy was just one of the boys using the church’s open field for training and that they decided to do a documentary on the boy weeks after he returned from the Golden Eaglet assignment, teaching him what to say as if the church was part of his success story. 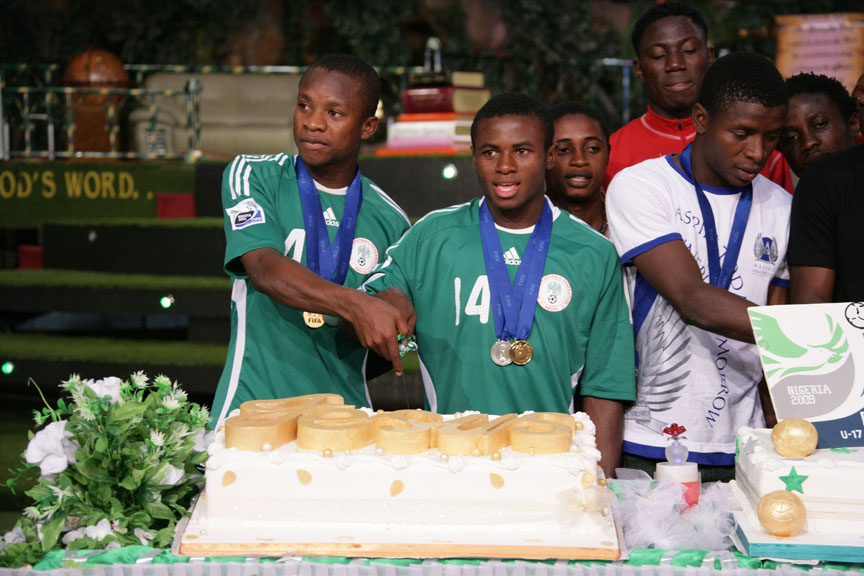 She challenged Prophet T.B. Joshua on the welfare of the boy that was once dubbed the Golden son of the SCOAN. It was discovered that the Prophet T.B. Joshua led church had during and after the World U17 tournament the church blog had published a story under the title “SANI EMMANUEL: FROM TRAGEDY TO TRIUMPH!”

In the article the church claimed the young player is back in the church where he’s living “The news is that the boy honed his soccer career at a most unlikely place – the church, specifically the Synagogue Church Of All Nations, where he is top striker with My People FC, a football club owned and funded by the church’s General Overseer, Prophet T.B. Joshua.

YOU MAY ALSO LIKE:   Major Upset As Kachikwu Beat Kingsley Moghalu To ADC Presidential Ticket

Emmanuel has since returned to the Synagogue where he lives. And last Sunday 22nd November 2009, he set thousands of parishioners into rapturous celebration as he stormed the sanctuary for a thanksgiving session. Former Zambian president Frederick Chiluba was among other eminent persons that rejoiced with Emmanuel, who dedicated his awards to Nigeria’s rising army of suffering youth, pledging to start a foundation that would help them become useful and influential members of the society” the report said.

YOU MAY ALSO LIKE:   Nigeria To Host 2019 African Netpreneurs Conference

Evangelist Biola Johnson also accuse the televangelist of using Sani’s documentary on Emmanuel TV to lure youths who were of the opinion that they have a career in football into the church while he’s doing nothing towards the development of these boy, she affirmed that the disposition of the supposed benevolent giver towards the health implication of Sani Emmanuel during this his trying period shows Prophet T.B. Joshua’s giving philosophy is to merely gather publicity towards his supposed philanthropic nature.