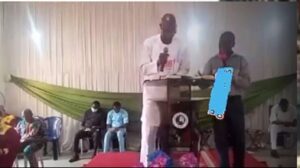 A deacon at the Evangelical Church Winning All, Onikoko, Abeokuta, Ogun State, Francis Ogunnusi, has died while preaching in the church on Sunday.

The late deacon was the Baale of Onikoko community, near the Panseke area of Abeokuta.

Our correspondent gathered that Ogunnusi was on the pulpit on Sunday preaching against the get-rich-quick syndrome that had become the order of the day in different parts of the country.

Our correspondent saw a video where the deceased was heard warning those killing others to get rich, saying when they died, the money would be taken by other people.

Ogunnusi, while preaching in Yoruba, said, “The money you make through unlawful means, killing people, sucking human blood, when death comes, it will belong to another person.”

However, as his interpreter was about presenting the words in English language, Ogunnusi fell with the microphone in his hand.

This led to commotion in the church hall, as people rushed him to a hospital.

A member of the church, who did not want to be identified, said the victim was rushed to the Federal Medical Centre, Idi Aba, Abeokuta, where he was pronounced dead.

YOU MAY ALSO LIKE:   Just In: IGP Suspends Tinted Vehicle Windscreen Permits In Nigeria

Greedy youths in search of quick fortune resort to money rituals, send victims to early grave
The source said, “The man was not the pastor of that church; he was just an elder. He was the Baale of Onikoko. He was the one that delivered the sermon on Sunday.

“He was talking about death and people who made money by killing other people. All of a sudden, he collapsed. He was rushed to the FMC, where he died. We don’t know what happened. I was very scared. Everything was disrupted. We just said the grace and went home.”

YOU MAY ALSO LIKE:   FIRSTBANK SPONSORS THE 5TH EDITION OF THE CHIEF OLUSEGUN OBASANJO GOLF TOURNAMENT

The source could not tell if Ogunnusi had any health challenge before the incident, adding that the deceased was between 60 and 70 years old.

It was gathered that the church at Onikoko is the headquarters of ECWA in Ogun State.

The corpse was said to have been deposited in a mortuary.