VIDEO: How Singer, Teni Escapes Alleged Kidnap Attempt During Her Performance In Rivers 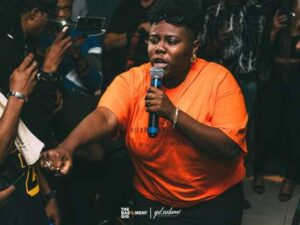 The artiste was performing at a New Yea show in the state when chaos and pandemonium broke out and everyone scampered to safety.

Eyewitnesses say that some unknown persons tried to kidnap Teni while she was on stage performing, but her bouncers, who were armed fired some gunshots into the air.

A video from the incident showed the moment the said abduction was about to occur and the crowd went into disarray, leading to a stampede. Gunshots could also be heard in the clip.

An attendee took to Twitter to narrate what allegedly happened at the concert.