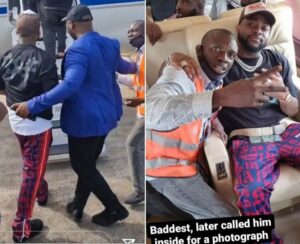 Popular Nigerian musician David Adeleke also known as Davido has shown how kind-hearted he is by behaving in a remarkable way towards one of his fans.

In a video posted on Instagram, Davido is seen walking towards an airplane in an airport located in Benin. An airport staff who happens to be a fan of the popular musician was trying to get a picture of himself and the musician together, but in a bid to protect his employer, Davido’s bodyguard pushed him away.

To apologize for his bodyguard actions, Davido later called for the hotel staff and grants him his wish of having a picture with him.

YOU MAY ALSO LIKE:   FIRSTBANK ENHANCES PALLIATIVE MEASURES, PROMOTES e-LEARNING FOR NIGERIANS
(VIDEO) See What Davido Did To This Airport Staff Who Got Pushed Away By His Bodyguard 2021-10-11
Oluwasegun Adesuyi
Share

Previous Those condemning brutal flogging of madrasa students encourage their children to go for BBNaija — MURIC
Next PandoraPapers: I have $15 million in Offshore accounts – Peter Obi