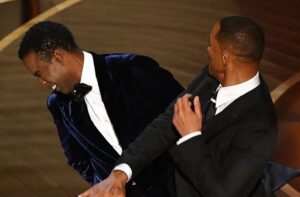 Popular American actor, rapper, and film producer, Willard Carroll Smith, has apologised after he slapped Chris Rock for making a bad joke about his wife, Jada Pinkett Smith, during the 2022 Academy Awards.

The Fresh Prince, as he is fondly called, had taken to the podium to smack Rock while making his jokes during the 94th Oscar awards.

The comedian made a joke about Jada’s baldhead, which she had shaved as a result of ‘Alopecia areata’ which is a health condition that causes sudden hair loss.

Smith had won his first Oscar in the best actor category for his role in “King Richard” after the incident with Rock.

After the awards, Smith took to his Instagram to publicly apologise to Rock, the producers of the Oscar Award, and his family for his misconduct during the Sunday ceremony.

He wrote, “Violence in all of its forms is poisonous and destructive. My behavior at last night’s Academy Awards was unacceptable and inexcusable. Jokes at my expense are a part of the job, but a joke about Jada’s medical condition was too much for me to bear and I reacted
emotionally.

“I would like to publicly apologize to you, Chris. I was out of line and I was wrong. I am embarrassed and my actions were not indicative of the man I want to be. There is no place for violence in a world of love and kindness.

“I would also like to apologize to the
Academy, the producers of the show,
all the attendees and everyone watching around the world. I would like to apologize to the Williams Family and my King Richard Family. I deeply regret that my behavior has stained what has been an otherwise gorgeous journey for all of us. I am a work in progress.”

YOU MAY ALSO LIKE:   Meet Diaz, Brazil-Based Identical Music Duo, Waiting To Explode

Jada had announced in December last year that she was shaving her head because she has Alopecia.