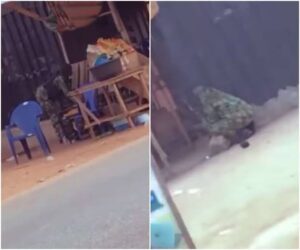 A video of uniformed soldiers seen hiding for their lives during the Thursday’s attack carried out by gunmen on several banks in Uromi, Edo state have surfaced on social media.
It was earlier reported that three banks were attacked by armed robbers in Uromi community, Esan North-East Local Government Area of Edo State.

It was gathered that no fewer than five persons, including a policeman, were reportedly killed during the robbery attack.

The banks that were robbed by the gunmen include First Bank, Union Bank, and Unity Bank.

It was learned that the robbers gained access to the banks through the aid of dynamites and made away with huge cash.

The bank robbers shot sporadically into the air while the operation lasted, leaving residents to scamper for safety.

Recent update reaching this publication revealed that 21 persons died from the attack with their bodies are said to have been deposited at St Camillius Hospital’s Mortuary.

YOU MAY ALSO LIKE:   2023: Amosun Speaks on Stepping Down For Tinubu, Others

A resident in the area told reporters that the attacks were coordinated, adding that the robbers came prepared.

In the new video shared online captured the moment the uniformed men were hiding for the fear of their lives while the attack lasted for more than an hour.

Soldiers spotted hiding as robbers ravage banks in Uromi. Sources have it that the police station locked their gate 🤦🏾‍♂️ pic.twitter.com/MPRNuVIj8T

Previous FUNKE ASHEKUN: YOU HAVE SET UP A PLATFORM THAT WILL RUIN YOU
Next Rotary District 9110 Holds Day Of Service To Commemorate 117th Anniversary