We Have Arrested Those Who Attacked Governor Ortom”-Police Boss 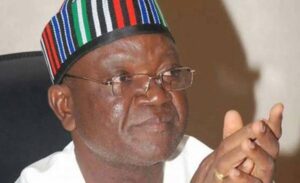 The Nigeria Police says it has arrested the people that are allegedly involved in the failed attack on Governor Samuel Ortom of Benue State.

Acting Inspector-General of Police, Usman Baba, disclosed this on Thursday at the weekly special briefing of State House Correspondents, organised by the Presidential Media Team.

YOU MAY ALSO LIKE:   Alleged Kidnap: Court Places Ameerah On 1 Year Psychiatric Care

Baba said; “We have been able to uncover the assailants and we have uncovered what actually happened, contrary to what he said.

“We have been able get these people and know where they came from and how they came but the case is still under investigation. But as for those who organized and those who pulled the trigger have all been arrested.”

Governor Ortom had in March this year, alleged that gunmen suspected to be Fulani herders attacked him on his farm near Tyo-mu, along Makurdi-Gboko Highway of Benue State.

The Governor, who appeared ruffled while speaking to Journalists after the foiled attack at the Benue People’s House, Makurdi, said armed militiamen, numbering about 15, advanced quickly towards his convoy with sophisticated weapons but were repelled by his security details.

He said the men, dressed in black, had trailed his convoy from his farm.

YOU MAY ALSO LIKE:   2023: Oshiomhole Speaks On Presidential Ambition
We Have Arrested Those Who Attacked Governor Ortom”-Police Boss 2021-05-27
Oluwasegun Adesuyi
Share

Tags We Have Arrested Those Who Attacked Governor Ortom”-Police Boss