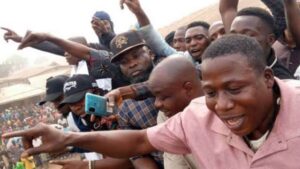 Yoruba Nation Agitator Chief Sunday Adeyemo aka Sunday Igboho has told President Muhammadu Buhari he is not in support of restructuring but liberation of Yorubas.

But several political leaders in the region, including National Leader of the All Progressives Congress (APC) Asiwaju Bola Ahmed Tinub; Speaker Femi Gbajabiamila; former APC National Interim Chairman Bisi Akande and other prominent leaders in the South-West have kicked against the idea.

They called for national cohesion as against ethnicity.

But Igboho, while receiving a vehicle presented to him by some donors to support the Yoruba Nation agitation, accused the current administration of marginalising the South-West region especially in terms of appointments.
Of recent, Igboho expressed anger over the continuous killing and kidnapping of Yorubas by the killer herdsmen in the region.

He said: “Our demand is simple, to tell Buhari that we do not want restructuring but Yoruba Nation.

“On Yoruba Nation, no going back. We have our faith in God. When God heard the cries of Israelites, he answered them; the cries of Yorubas have been heard by God. Noah’s ark can be likened to the current Yoruba agitation.

“I’m saying it boldly; nobody can kill us in this current struggle. May God carry us to our destination.

YOU MAY ALSO LIKE:   Just In: DSS Operatives Drop Women Arrested At Sunday Igboho’s House In Akure

“Many people are even ranting on social media concerning the struggle, they need to join and support. What we are currently having now is awareness and peaceful rallies across southwest states.

“Don’t think we are joking, what we are pursuing now is Yoruba Nation. I’m not the only one fronting the Yoruba Nation Agenda right now; there are many powerful people who I have been meeting and working with underground.”

YOU MAY ALSO LIKE:   Heritage Bank MD tasks govt on policies to support private sector interventions for infrastructure growth

He noted the struggle can be won with collective efforts, appreciating many clerics and community leaders for their private and public support.

Previous APC Announces Date To Begin Sale Of Forms For Congresses
Next 18 APC Governors, Other Chieftains On Hand To Welcome Matawalle As He Defects From PDP