What Buhari Must Do Before Edo Election by Olutomiwa Alfred 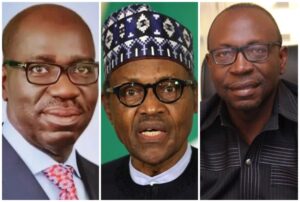 The September 19th governorship election in Edo State comes with a lot of promises and perils for the political legacy of President Muhammadu Buhari. Lest he is unaware, his claims to a lasting, positive legacy for the All Progressives Congress, APC, are dependent largely on the outcome of the Edo, nay Ondo elections. Alas, it is almost common knowledge that, where he is not directly affected, President Buhari can be patently detached while maintaining a Grand Canyon of distance.

But there is fire on the mountain in Edo State and with the election a few days away, the president needs to shed that passé toga of detachment and adorn the garb of pragmatic proactiveness. This is because the battle for the heart and soul of the state is not just between Governor Godwin Obaseki, the Peoples Democratic Party, PDP, candidate and APC’s Pastor Osagie Ize-Iyamu; several powerful forces are tugging at the soul of the state for different pecuniary or political reasons.

As a candidate, Ize-Iyamu has run a good campaign so far. He has creditably sold his SIMPLE (Security and Social Welfare, Infrastructure Development, Manpower Development, Public/Private Partnership, Leadership by Example and Employment Creation) Agenda to the electorate, who now perceives him as a cut above the rest – the one who can liberate them from the shackles of under-development and misgovernance exemplified by the incumbent.

As someone, who is also firmly rooted in the politics of the state, he has also clearly debunked insinuations in several quarters that if he emerged governor, he would be under the shadows and viselike grip of former Governor Adams Oshiomhole.

What many don’t know or are deliberately glossing over is that Ize-Iyamu has been in politics at the local and national level longer than Oshiomhole. In 1999, upon the return of democratic government to Nigeria, Ize-Iyamu was appointed as the Chief of Staff to the then Governor of Edo State, Dr. Lucky Nosakhare Igbinedion.

During Igbinedion’s second term, he was elevated to the post of Secretary to the State Government (SSG). All this while, Oshiomhole was a mere activist and labour leader – serving as President of the Nigeria Labour Congress, NLC. Ize-Iyamu later served as national vice-chairman, South-south zone of the defunct Action Congress of Nigeria (ACN), one of the legacy parties that formed the APC.

Because of his understanding of the Edo political terrain and familiarity with the people, Ize-Iyamu was appointed the Director-General of Oshiomhole’s second term Campaign Organisation and he delivered. So, Ize-Iyamu is no neophyte in politics or a yo-yo that can be tossed about by any person masquerading as a godfather.

This is a fact that has yet to be clearly understood by some frontline members of the APC especially many of the sitting governors and senators, who see Obaseki’s denial of a second term ticket as the handiwork of Oshiomhole. This is the crux of the matter.

YOU MAY ALSO LIKE:   Taliban ban barbers from shaving, trimming beards in Afghanistan

Until recently, Oshiomhole was the chairman of the APC. He piggybacked and bankrolled Obaseki’s emergence as governor in 2016. Before that time, Obaseki served in Oshiomhole’s administration as chairman of the Economic and Strategy Team.

The former governor introduced Obaseki into politics, because all his life, he had been in the private sector as a financial expert and chairman/founder of Afrinvest West Africa Limited (formerly Securities Transactions & Trust Company Limited (SecTrust), which has grown to become a reputable investment banking and management firm in Nigeria. So, Obaseki can legitimately be called Oshiomhole’s political godson. There’s no debating that.

Their common song, however, became a byword, when they fell apart over allegations that Obaseki had become imperious and power-drunk. A case in point was his unconstitutional refusal to inaugurate the House of Assembly in 2019, because he perceived that his predecessor had more loyalists there than he does, which he felt would affect him or so. That issue stagnated legislative activities in the state since last year necessitating the intervention of President Buhari and the National Assembly. The Assembly is still a divided house thereby denying the people quality legislative representation.

Last June, Obaseki defected to the PDP, where he was offered the governorship ticket at the detriment of other aspirants. Many incumbent governors fingered Oshiomhole as being responsible for this defection and went all out to have him removed.

As the reports go, a delegation of angry APC governors met with the president and presented to him three requests one of which was Oshiomhole’s removal, dissolution of the National Working Committee and the constitution of a caretaker committee headed by Mai Mala Buni, the governor of Yobe State.

All of these were granted. The president never made any request of the governors. In fact, reports say that they were shocked that he acceded to all their requests.

Like the President noted in June during the inauguration of the caretaker committee, “It is obvious that the fortunes of the party are currently, in jeopardy, administration of our party is becoming impossible and there is consequently an urgent need for intervention to immediately arrest further drifts and internal wrangling, which may lead to total disintegration.” Those issues are still omnipresent in the party.

Beneath the patina of cohesion put up by the APC leadership, however, there is a simmering animosity and disconnect that can only be remedied by the president. Some APC governors are still sympathetic to Obaseki and are supporting his re-election bid on the PDP platform with an unwritten agreement that if he won, he would return to the APC.

The APC governors’ support for him is deemed a reprisal at Oshiomhole, who they fear might want to stage a return to the leadership of the party. They don’t want him back; neither do they want Ize-Iyamu to win, because of the Oshiomhole factor. It is a dicey situation that does not bode well for the party in the long run. So, how does quid pro quo work for the President?

It is now time for the president to ask a favour of the governors, which is for them to close ranks and ensure that they not only win Edo State; they do so convincingly and move on to Ondo State, which governorship election is in October. He must call the aggrieved governors to order by discouraging and denouncing their apparent anti-party activities, speak to their collective conscience, probably make them swear to an oath of allegiance if that would help whip them into line, and commit them to work for the party and Ize-Iyamu. Failure to do this now could leave a blotch on whatever legacy the president might want to lay claim to after his stewardship in office.

Alfred, a communication analyst, lives and works in Abuja