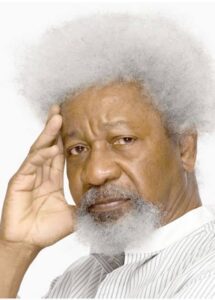 Nobel laureate, Prof. Wole Soyinka, has disclosed how tackling mathematical equations saved him from insanity when Nigeria’s military junta locked him in jail for 27 months even though he disliked the subject while in secondary school.

The elder statesman stated this yesterday while receiving academic laureates who did Ogun State proud in academic competitions, at his Kemta, Idi Aba home in Abeokuta, the Ogun State capital.

Soyinka said it was while in the gulag that he “realized that you must always have an integration, a common line – be you a historian, horticulturist, mathematician…”

According to him, “I hated mathematics at school. I hated my teachers who were very brilliant at mathematics and they forced it down our throats whether we liked it or not.”

The revered playwright, while addressing the laureates, advised them not to prioritize any subject above others.

He further encouraged them to always have a holistic sense of integration and interaction of subjects, which he noted, would help them to excel in all spheres of life.

Speaking at the event, Governor Dapo Abiodun, while highlighting some of the achievements of his administration in the education sector, promised to continue to sustain and uphold the legacy of the founding fathers of the state who strived to make Ogun a citadel of education.

The governor, represented by the Secretary to the State Government, Tokunbo Talabi, urged the awardees to thrive in giving their best and promised that the state would continue to create an enabling environment for learners to excel.

“We are indeed proud of all our academic laureates who have distinguished themselves in different competitions. And as a state, we promise to continue to put in the required provisions that will continue to aid teaching and learning activities that will produce more academic giants,” the Governor said.

YOU MAY ALSO LIKE:   BREAKING! Fashola Rejects 2023 Presidential Candidacy