Home / Politics / Where Does Obaseki Go from Here? by Temilorun Asorobi 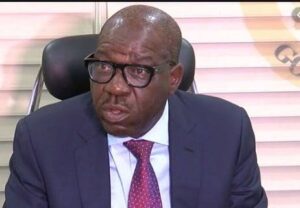 When the axe dropped on the re-election bid of Governor Godwin Obaseki of Edo State recently, it cut so deep that healing from it before the governorship poll in September 19 would be a miracle akin to zero coming up on a roulette table with the last try.

Last Thursday, the long-drawn Edo House of Assembly crisis reached a crescendo with the impeachment of the factional speaker, Frank Okiye, by 17 lawmakers. It is a 24-member House with Okiye and nine others loyal to Obaseki hitherto calling the shots while the remaining 14 lawmakers were not inaugurated and their seats controversially declared vacant by the Okiye-led minority.

Alas, three of Okiye’s nine supporters, including the deputy speaker, Yekini Idiaye, later joined the 14 lawmakers to make a total 17, yet, Idiaye was promptly and crudely impeached by Okiye and his six-man team. It was all part of the mischievous machination of a power-drunk governor. But events played out contrary to Obaseki’s draconian plot.

Shortly after the inauguration of the 17 lawmakers, Obaseki caused the roof of the Assembly complex to be removed while heaps of sand and gravels for a purported renovation were dumped at the gate, therefore, preventing entry or any decent sitting by the lawmakers.

The lawmakers, then, beseeched the Minister of Justice and Attorney-General of the Federation, Abubakar Malami, to intervene and he wrote to the Inspector-General of Police, Mohammed Adamu, asking him to provide adequate security for the lawmakers to prevent a possible breakdown of law and order.

The timely call by the AGF sounded the death knell on Obaseki’s second term bid and for those, who believe in karma served as a comeuppance for his blasé injustice against legitimately elected lawmakers.
For many weeks after the Assembly ought to have been inaugurated in 2019, Obaseki refused to initially order a proclamation, in line with constitutional provisions, to clear the way for the inauguration and constitution of the seventh assembly.

This reluctance, which would later snowball into an open confrontation, was reportedly predicated on the governor’s belief that he did not have enough foot soldiers in the Assembly as against the number loyal to his predecessor and former national chairman of the APC, Comrade Adams Oshiomhole.

His deliberate dithering caused further depletion in the number of the lawmakers loyal to him and he vowed that the doors of the assembly would remain shut for as long as he desired.

YOU MAY ALSO LIKE:   AFRICA FILM FOR IMPACT FESTIVAL UNVEILS, CALLS FOR ENTRIES

This elicited outrage from well-meaning Nigerians, who warned him against what he was doing as unconstitutional and that it had dire political consequences. Still, no amount of intervention or appeal could sway Obaseki.

Like a dog fated to loss and misfortune, it would not hear the whistle of the hunter. Obaseki had made up his mind to deny the good people of Edo State adequate legislative representation while fighting his benefactors to the finish.

When he eventually inaugurated the house, he exempted a majority of the duly elected lawmakers and enabled illegality to run and reign. He forgot that the bread always falls on the buttered side; that he who sows the wind will inevitably reap the whirlwind.

Now that he is self-destruct and fighting the battle of his political life, with the consequent distraction from electioneering, Obaseki has, conversely, traded a sound, issue-based campaign for brigandage, where he is a neophyte. September 19 is almost a foregone conclusion for Obaseki. It takes not much to see this.

YOU MAY ALSO LIKE:   JUST IN: Lawmaker hints at Opposition plans to impeach Senate President Lawan

What should have been a two-horse race between him and Pastor Osagie Ize-Iyamu of the APC has become a home run for the latter, who opinion polls and popular sentiments favour. The consensus now is that despite his incumbency, Obaseki is the architect of the misfortune that has truncated his re-election bid in midstream.
Without any political structure or understanding of the political terrain, Obaseki, then an aide of Oshiomhole was piggy-backed to the Government House by his principal, who swore by everything he held sacred that Obaseki would take the state beyond the point he did.

In his eight years as governor, Oshiomole did his best, wresting the state from the misrule and wanton mismanagement of state resources from the PDP government that had been in power since the return to a democratic dispensation in 1999. He assumed office at a time the state revenue was so low but with high expectations from the people.
But with sheer commitment and sound economic policies, the fortunes of the state were turned around. Within his first term, Oshiomhole raised the IGR of the state from N300milion to over NI.6 billion; and embarked on a massive infrastructure renewal of the state, building hundreds of kilometres of new roads, schools and hospitals among others.

During electioneering in 2016, even Obaseki said, “Given the high level to which Comrade Adams Oshiomhole has taken Edo State, going forward, the state needs a governor that is game-ready, one that will hit the ground running. I believe I am that person by the grace of God.” He also promised to build, consolidate, sustain and improve on the achievements recorded by Oshiomhole’s government.

That, perplexingly, was the point of departure. Obaseki was never grounded in the politics of the state, in fact, there were insinuations that he barely knew his way around Benin City, the state capital much less the hinterlands, but Oshiomhole did not listen to all of the leads that forewarned him.
In his estimation, the re-engineering of the state economy, which Obaseki and the team at the Edo State Government Economic and Strategy Team (EST) effectuated was enough to convince him that he could be trusted.

Oshiomhole, a redoubtable labour activist, who had spent over three decades in the trenches advocating and agitating for better remuneration for Nigerian workers, stomped the nooks and crannies of the state, propagating the ideals of his presumptive successor, assuring the people that he was qualified and capable of taking the state to another level of development.
Oshiomhole campaigned as though his life depended on it and Obaseki won without any input into the entire electioneering process. All that was required was his presence and at best, a vote of thanks.
Now that he was actually expected to experience what it means to campaign for a governorship election, he has short-circuited the process and done his second term bid a devastating damage that has ultimately foreclosed whatever chances he and his soap-opera cheer-leaders thought he had on September 19.

@societygazette
Previous Obaseki, a Man at War With Himself by Ahmed Agbabiaka
Next EARL” OSARO ONAIWU’S POLITICS OF HATE, ENVY AND INGRATITUDE by Prince Emmanuel Odigie