In the letter he accused the executive governor of Edo State of financial improprieties that runs into several billions of Naira in many ghost accounts.

The whistleblower who has in the past blown lid on major financial crimes, some of which includes; the EFCC and the Office of the Vice-President.

The group did not only expose the anomaly but also issued Gov. Obaseki a 48 hours ultimatum to respond to the grave allegations brought against him.

Below is a list of the damaging findings as reported by the Whistleblower.

1) Transfers made into 8-digit account numbers running into Billions of Naira;

3) We found Billions of Naira in transfers to Ministries, Departments and Agencies (MDAs) without being specific on the particular MDAs. Transfers should not be in bulk figures in Billions of Naira without specifying the MDAs and their respective account numbers.

YOU MAY ALSO LIKE:   Gulder Ultimate Search: 12 contestants Set To Be Unveiled Today

4) We found that Billions of Naira passed through Edo State Government to companies like A&K Construction without specifying the accounts of the companies. in other words, Edo State Government released money to itself, mentioned companies like A&K Construction without mentioning the recipients’ accounts. Without those details, we can conclude that the monies have no destinations.

YOU MAY ALSO LIKE:   JUST IN: ASUU President Rejects N50m Intervention To End Strike

5) Billions of Naira were transferred in numerous tranches without account numbers and account names of the purported recipients.

6) Billions of Naira debited as Value Added Tax (VAT). This contravenes common sense. VAT should be a credit not debit. Why would you move Billions out and give the narration as VAT? VAT collections are credits, not debits.

YOU MAY ALSO LIKE:   ODUMOSU APPROVES APPOINTMENT OF NEW DEPUTY PPRO AS LAGOS COMMANDS CAUTIONS AGAINST SPECULATIONS ON OJORA’S DEATH

7) Billions of Naira released as salary from EDSG without specificity. August 2019 alone, N746,622,765:33 and N693,388,159:31 were moved under the narration salary from EDSG. This is very suspicious, particularly the proximity of the transactions and others above to the election.

Below is the attached letter; 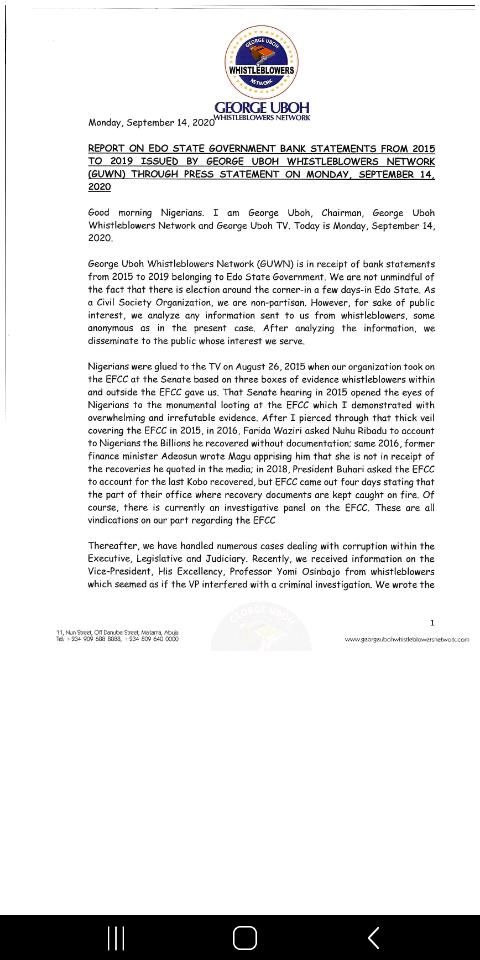 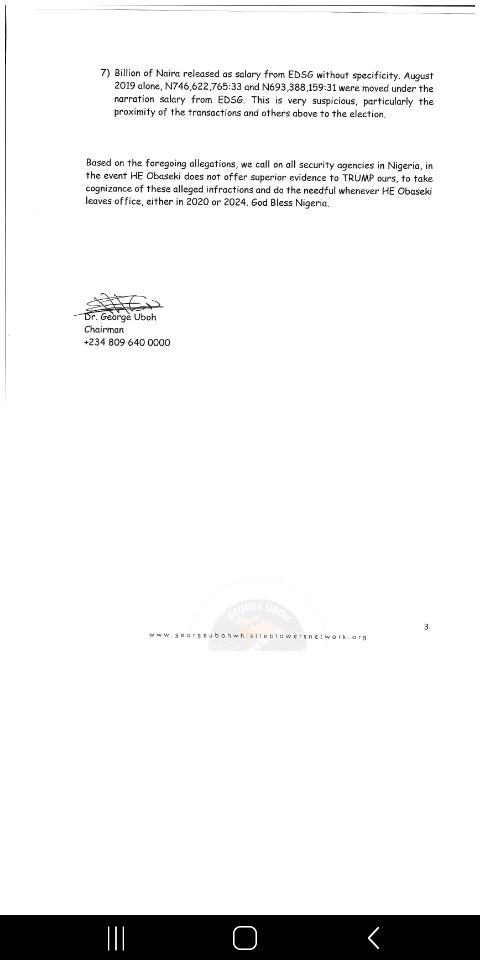