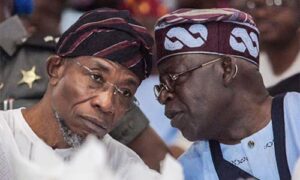 2023 is two years after now but the preparations and works going on ahead of the year makes it feel like we are moving into it next week especially for politicians.

For political leaders and parties, 2023 is not just any other year, it’s a very significant year because that is when Nigeria will be holding her next presidential election.

Leading parties, APC and PDP have been trying to test the popularity of some certain individuals to know how their acceptance feel like by the party members and the general public.

One of the parties that have been excellently doing this is the All Progressive Congress (APC), with the presentation of the national leader of the party, Asiwaju Bola Ahmed Tinubu as the likely candidate for the presidency in 2023.

Tinubu has also been making some moves to register his name in the minds of the crowd most especially in the northern part of Nigeria where most of the votes comes from. He held his annual colloquial lecture in Kano, was in Benue for a honorary degree, Gave huge amount of money to marketers who lost their goods to inferno in Katsina, to mention a few.

In the PDP too, Olubukola Saraki has been seen making moves to reconcile aggrieved members and leaders of the party, he has been to former President Goodluck Jonathan, the national leadership of the party, and all that. These are ways to test popularity ahead of 2023.

However, for the APC, It is a known fact that Asiwaju Bola Ahmed’s possible candidacy in 2023 has been rejected by some powerful people, He won’t be needing the acceptance of the party members alone, he needs the general public too but does he have the support of the public? I doubt this.

He has been accused of several things just because he wants to contest, and for real, some of this allegations have iota of truth in them, this ambition of his will continue to open rooms for accusations against him which might be true at the end of the day.

Tinubu, no doubt is blessed with men, He has helped people to be in power and due to this, He even has control over them, it is enough for him, why not look for another trusted fellow like him in the party? Someone who doesn’t have bad records, and one who has administrative experience?

YOU MAY ALSO LIKE:   UPDATED: Four dead as robbers attack bullion van in Ibadan

In APC, Rauf Aregbesola is the next after Tinubu, who also has the political structure and sagacity, He has also been a governor, senator, he is a serving minister, so he has the experiences needed, just like Tinubu. Infact, I would say He has more experience in Governance that Asiwaju Bola Ahmed Tinubu.

YOU MAY ALSO LIKE:   ‘Reconsider your position’ — Ngige begs resident doctors to resume work

Apart from his experiences, Rauf Aregbesola is almost a clean politician, no one can accuse him of any unpleasant thing. Why can’t the APC look at this man instead of the national leader?