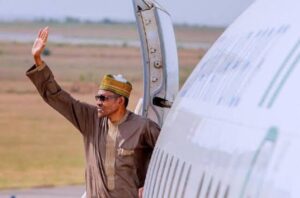 The presidency has explained why President Muhammadu Buhari came back to the country instead of traveling to the UK as scheduled.

The Senior Special Assistant to the President on Media and Publicity, Mr Garba Shehu, in a statement said the President will depart Nigeria on Sunday for his scheduled medical leave.

The statement was a reaction to the president’s surprise return to Nigeria from Kenya after earlier itinerary billed the president to leave for the UK from the East African country.

Shehu said the president returned to Abuja early following completion of his task in Nairobi far ahead of schedule.

According to Shehu, the president “hasn’t shelved his trip to London. The plan is still there. He finished his business in Kenya and made an early return. The trip to London is Sunday.”

The quiet return of the president was announced by a junior aide to President, Bashir Ahmad, in a twitter post.

He had caused confusion after tweeting, “President Muhammadu Buhari has returned to Abuja, after his participation in the 50th Anniversary of the UN Environmental Programme (UNEP) in Nairobi, Kenya.”

There was no official statement until the confusion forced Shehu to react.

YOU MAY ALSO LIKE:   Naira Marley’s Signee, Mohbad Arrested In Cyprus

The president’s participation at the event in Kenya was announced by Mr Femi Adesina through Facebook showing him attending a “High Level Opening Segment of the 50th Anniversary of the United Nations Environmental Program (UNEP) on 3rd Mar 2022.”

YOU MAY ALSO LIKE:   President Buhari And Foresight On Ambassadorial Nominations
Why Buhari Returned To Nigeria Instead Of Jetting To UK For Medical Checks – Presidency 2022-03-04
Oluwasegun Adesuyi
Share