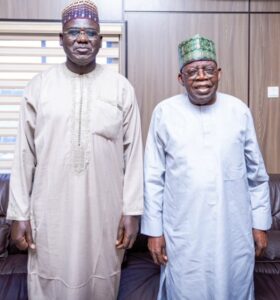 H.E Amb Tukur Yusufu Buratai (Lt Gen Rtd) met with the All Progressive Congress (APC), Presidential flag bearer, Asiwaju Bola Ahmed Tinubu in Abuja. Although the details of the meeting is not disclosed, but it may not be unconnected with the 2023 elections.

Given his reputable track record as a war tested General, and the longest serving Chief of Army Staff in Nigeria’s history, and as a diplomat, HE Buratai is vastly experienced in strategic leadership and human resource management.

He would certainly add great value to APC’s victory in next year’s general elections and the emergence of Asiwaju Bola Tinubu as Nigeria’s President.

We foresee a lot of electoral value coming the way of the APC as a result of the fusion of forces of these great leaders and FUSION NIGERIA would like to call on all Nigerians to support the APC to ensure its resounding victory in next year’s polls.

Joining forces of the two leaders could mean well for the APC party, it is also an indication of a stronger ties for BAT in the build up of the presidential election.

This could mean alot for the success of the APC in the up coming general elections.