Home / cover / ‘Why I Called Tinubu Mr. President In London’ – House Of Rep Member Opens Up

‘Why I Called Tinubu Mr. President In London’ – House Of Rep Member Opens Up 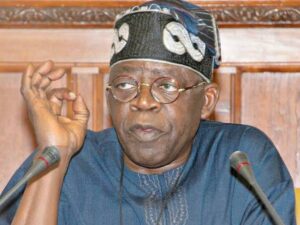 ‘Why I Called Tinubu Mr. President In London’ – House Of Rep Member Opens Up

The lawmaker representing Suleja/Tafa And Gurara federal constituency of Niger State in the House of Representatives, Abubakar Lado Suleja has been identified as the person who addressed Asiwaju Bola Tinubu as Mr. President recently in London.
It will be recalled that some Northern lawmakers last week, visited the National Leader of the All Progressives Congress (APC), Tinubu in London.

The legislators were led on the visit by the Deputy Speaker of the House of Representatives, Hon Ahmed Idris Wase.

However, a video emerged and went viral of one of the lawmakers during the visit, addressing Tinubu as Mr. President, to which the former Lagos Governor also responded thank you as captured in the video which went viral on the internet.

“Mr President, see you soon,” the lawmaker had said and Tinubu responded by saying “Thank you.”

With Nigerians eager to know the face behind the words, Honourable Suleja has now been revealed as the one who called Tinubu ‘Mr. President.’

When contacted for a confirmation and clarification, the lawmaker acknowledged calling Tinubu Mr. President but, however, added that he put Insha Allah which means ‘by God’s grace.’

Suleja stated this when he was questioned by the Daily Trust correspondent who reached out to him on whether his statement doesn’t imply that Nigeria now has two presidents.

YOU MAY ALSO LIKE:   'You Are Mentally Sick And Possessed' - Odumeje Fires back At Reverend Okotie For Attacking Late TB Joshua (VIDEO)

He said: “No, we don’t have two presidents, maybe you didn’t listen to the video very well because when I said Mr President, Insha Allah followed it, which means by God’s grace.”

The lawmaker added that it is their wish for Tinubu to become the next President of Nigeria in 2023.

He also denied speculations that the lawmakers were in London to endorse Tinubu for the 2023 presidency, saying it was rather a visit to check up on him healthwise.

He said it would be wrong to assume they were there for the purpose of endorsement, adding that such a position will insinuate that everyone who had visited Tinubu in London including President Muhammadu Buhari himself were there for endorsement purposes.

YOU MAY ALSO LIKE:   Shaibu’s Irredeemable Reputational Damage by Osagie Osunbor

“The purpose of our visit was to see his health condition, to pray for him and wish him well. He is very okay and as you can see from the video clip, he looks fine. He stood for almost one hour addressing us.”

Tags 'Why I Called Tinubu Mr. President In London' – House Of Rep Member Opens Up

Previous Zuckerberg loses $6 billion in hours as Facebook nosedive, Drops to No. 5 on world’s richest list
Next Lagos Lawmakers Campaign for more Investments in Waterways Transportation