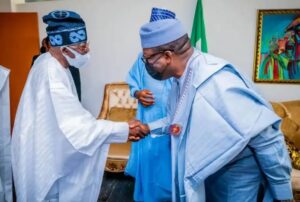 Governor Kayode Fayemi of Ekiti State has described his meeting with the National Leader of the All Progressives Congress (APC) as a “family meeting of minds”.
Naija News reports that Fayemi had met with Tinubu after the former Lagos State governor declared his intention to succeed President Muhammadu Buhari in 2023.

Reports had claimed that the meeting was convened to discuss the presidential ambition of Tinubu and the upcoming Ekiti State governorship election.

Reacting in a statement on Saturday, the Chief Press Secretary to Governor Fayemi, Yinka Oyebode, said the meeting of his principal with Tinubu had nothing to do with the presidential ambition or otherwise of either of the two political leaders.

In the statement titled, ‘Re: Tinubu-Fayemi meeting: The spin doctors got it wrong’, Oyebode stated that Tinubu and Fayemi’s relationship dates back to the dark years of military despotism.

According to the governor’s aide, Fayemi did not surrender his undeclared presidential ambition to Tinubu.

The statement partly read, “Meeting between the two leaders, dates as far back as their days in exile, when they were both involved in the struggle to wrest the country away from military jackboots, and has since been a regular occurrence both within and outside the country’s political space. So there should not be any big deal in seeing them meet, except someone has opted to create a mischief out of it.

“While the details of their recent meeting remain undisclosed, seeing the two of them who are being rumoured as potential presidential aspirants from the southwest together may naturally give way to speculations that the 2023 presidential election could form part of their discussions.

“This may have been further fuelled by the fact that Asiwaju Tinubu said he had informed President Muhammadu Buhari that he would be coveting the presidential seat in 2023. Dr Fayemi on the other hand; has yet to give any visible sign in that direction.

“However, both Asiwaju Tinubu’s declared ambition and Fayemi’s undeclared ambition have now been taken up and given verve by some spin doctors, particularly those who believe such could rev up their relevance in the eyes of either of the political leaders.

“What makes the matter worse is that such spin doctors, surreptitiously scrambling for relevance have been weaving, not half truths, but blatant lies into the Tinubu-Fayemi meeting, saying it signposted Dr Fayemi surrendering his undeclared ambition to Asiwaju Tinubu’s declared one.

“Specifically, they have been dishing out barefaced and unsubstantiated lies that Dr Fayemi at the closed door meeting “debunked the raging rumour of his 2023 presidential ambition and pledged support for the national leader of the All Progressives Congress Asiwaju Bola Ahmed Tinubu.

YOU MAY ALSO LIKE:   About Governor Douye Diri’s Silent Touch

“This, no doubt, is a reckless and untruthful spin. First, since the perpetrators were not present at the meeting and none of the leaders could have divulged what transpired, one wonders from where they got their narrative.

“Secondly, the spin doctors, were so consumed by their fictional hogwash that they could not consider it an impossibility for Fayemi to drop a rumoured, yet undeclared ambition, even when Asiwaju Tinubu said he was still consulting as to whether to run or not.

“The story by the spin doctors thus stands logic in the head and stands not only disclaimed but condemned. It must have been sourced from the rumour mill, or as a beer parlour gist. At its best, it is a mere conjecture.

“If and when Dr Fayemi chooses to declare his interest in running for the 2023 presidential ticket, he would not be embarking on an ego trip that would warrant going into unhealthy contest with Asiwaju Tinubu or anyone else. Fayemi sees Tinubu as his leader in politics and reserves respect for him as a national leader of his party. Neither will he run the race with the intention of using it to negotiate with anyone. Rather he will run because he is convinced it is desirable for him to do so.

YOU MAY ALSO LIKE:   We Have Mobilized Corp Members, Consultants To Replace Striking Doctors – Health Minister

“Perhaps the spin doctors are unmindful of the fact that Fayemi currently remains focused on finishing strong and well the assignment in his hand as two-term governor of Ekiti State. They also fail to realise that there is still a sitting President equally focused on finishing well his second term in office. Neither Fayemi nor Buhari would like to be distracted by such inanity at this juncture.

“Should Dr Fayemi eventually choose to run in the 2023 Presidential race at all, he would not hide his intention to do so, neither will he involve himself in any clandestine meeting to discuss his chances, since he would have been x-rayed and classified among the preferred aspirants based on his credentials, even before he makes such declaration.

“The masterminds of such fable are therefore advised to desist from doing so any further as it will not give them any political or social mileage. Rather it will wreak serious havoc on their personality, without reducing the worth of either Asiwaju Tinubu or Governor Fayemi who are respectable and respected leaders in their own rights.”