Why I’ve decided to support Ize-Iyamu against Obaseki – Okunbo 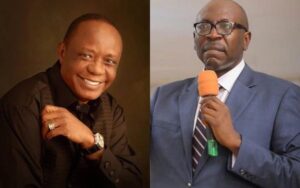 The Chairman, Ocean Marine Solution, Capt. Hosa Okunbo, has said he decided to support the All Progressives Congress candidate in the September 19 governorship election in Edo State, Pastor Osagie Ize-Iyamu, because the party will work to develop the state.

Okunbo, who said this in an interview in Abuja, described himself as a very close person to Governor Gowdin Obaseki, but said the governor should not be allowed to get a second term.

“I still consider Godwin my brother, but I don’t consider him a leader because he doesn’t have the attributes of a good leader,” he said.

Okunbor in the interview berated Obaseki, saying, “A governor that could not manage 24 House of Assembly members from his own party – they were not in opposition, all APC. Some of us worked to make that possible for him so he could have a smooth ride but he squandered the chance.

“It’s only unfortunate that Osagie Ize-Iyanmu, who also contested against him in 2016, is out there and I am supporting him by default and of course, I want a better Edo State and that’s all I can say.”

Okunbo accused Obaseki of non-performance, saying most of the lofty ideas he floated before his election in 2016 had remained on paper without being fulfilled, while he had sustained himself in office through propaganda.

He stated, “If Godwin presents to you his plans for Edo State on PowerPoint, you will kiss his feet. It is like in the Bible when the devil said take all these and bow before me and Jesus said, ‘Get thee behind me Satan’. And as we progressed, all those packages that he presented, none was done“

“A situation, where you have 600 children packed in a room and selling propaganda on social media of projects that are not there? It is appalling.

“It is the future of our children that is at stake; the liberation of our state from someone who thinks he is an emperor in this modern day is at stake.”

Okunbo alleged that Obaseki started a fierce battle against his business interests because of a rumour that was going round in the state that he (Okunbo) was planning to contest against him in the coming election.

YOU MAY ALSO LIKE:   Infant, Two Others Die In Ogun Gas Explosion

He said, “A lot of people approached me to run as the governor of Edo State and most of the people who did will tell you that I said I wasn’t interested because I have set a trajectory for my life and over the past 32 years, I have been involved in business and before that, I was a very good professional pilot.

“At 63, my mates that ran for governorship did that in 1999 and I was not ready to start learning new things. That is one of the reasons I tried to help Godwin, because in his old age, he could not learn new things; that is why he fell a victim.”

Okunbo explained that he warned Obaseki to settle the rift between him and his predecessor, Adams Oshiomhole, who was then the Chairman of the APC.

He said Obaseki refused to listen to him and follow the line of peace, adding that the governor rather warned him to steer clear of the raging battle or suffer “a collateral damage.”

YOU MAY ALSO LIKE:   Joshua Iginla, US medical Team embark on Free healthcare for all

When Okunbo’s allegations against the governor were listed and sent to the WhatsApp number of Obaseki’s Special Adviser on Media, Crusoe Osagie, he sent a statement titled, ‘APC stirring controversy to shift guber poll’.

In the statement, Osagie said the APC was stirring controversy so that the authorities could shift the September 19 governorship election.

He said, “Edo State is peaceful, the Peoples Democratic Party is committed to enduring peace before, during and after the poll.

“The APC leaders and the governorship candidate, Osagie Ize-Iyamu, are agitated because they are not ready for the election. They are convinced that they do not stand any chance in the forthcoming election.

“They are behaving like some unserious and misguided university students, who do not read, and when faced with examinations, they engage in cult fights few weeks to the examination, so that the school authority will shift the examination.”

He emphasized that state was peaceful as people were going about their business peacefully, and urged the APC candidate and his handlers to concentrate on their campaign.

When Osagie was told later that his response did not address Okunbor’s allegations, he sent the same statement again.