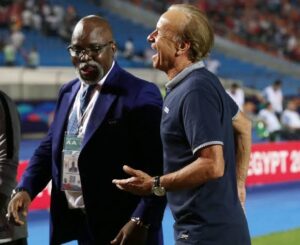 Nigerian Football Federation President, Amaju Pinnic, has made excuses for Super Eagles coach, Gernot Rohr, saying that the Eagles will qualify for the 2022 World Cup in Qatar under his watch.

The national team and the coach, Rohr came under serious criticism with many Nigarinas including former players calling for the sack of Rohr over loss to Central African Republic in Lagos.

The Super Eagles lost to the CAR by a lone goal, a team that has never won an away game in the World Cup Qualifiers.

But Pinnick defended the German on Arise Tv programme, ‘The Morning Show.’

Rohr 56, has been accused of running the national team from Germany and not competent to help the team book a place in Qatar.

In defence, Pinnick said the coach has never argued with the federation regarding living in Nigeria as claimed.

He said, “We have a contract with Gerhot to live in Nigeria and he has not been antagonistic to that. That is the truth. I’m not trying to defend him when I don’t need to defend him.

“But most of our players live outside the shores of this country and that what we do right now is that he is at the head of a monitoring team that monitors and talks to our players, talks to their teams, their backroom staff, their coaches and because he is an ex-international himself, he has relationship with most of their coaches. These are some of the things people don’t know.”

He further pointed out that the Super Eagles under the German coach will qualify for the World Cup, a feat which would secure his place as coach.

The NFF boss said, “I always want to believe that by God’s grace it is not negotiable that we will not qualify. We will do our best in the enterprise, putting everything together to ensure that Nigeria qualifies, because it is just one factor that unifies the country. It is just one factor that makes the country happy that is why we are not leaving any stone unturned.”

YOU MAY ALSO LIKE:   Olowu of Kuta asks North East elders to demand emergency rule

According to him, Rohr’s side lost to CAR in Lagos because the Eagles underestimated the team in Lagos.

“The incident in Lagos was quite unfortunate because we never expected that it would come even though we know it is football.

“My take on that is that our team underestimated the strength, the capacity of the team from the Central African Republic. In football, you pay for losing your chances and it was a very deep loss for us. I couldn’t sleep for days.”

Previous Court Issues Trial Notice In FG’s Treason Charges Against Nnamdi Kanu
Next Those Who Use Candles, Coconut For Deliverance Not Pastors, Says Salvation Ministry Priest