Home / cover / Woman With No Hands, Knees and Feet Shares Pictures Of Her Wedding

Woman With No Hands, Knees and Feet Shares Pictures Of Her Wedding 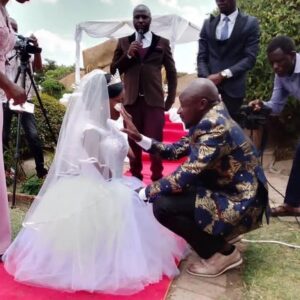 A Zimbabwean woman without limbs has shared pictures of her wedding on social media.
The 26-year-old woman, Sinikiwe Kademaunga who showed off her man, Reuben, few months back has now tied the knot with the love of her life. She took to Instagram to share the good news

Kademaunga was born without hands, knees, and feet.

YOU MAY ALSO LIKE:   BREAKING: Again, Fani-Kayode arrested by EFCC

In other news, a video of the Alaafin of Oyo, Oba Lamidi Adeyemi, dancing with one of his young Queens has surfaced on social media.

In the viral video, the 83-year-old king was pictured showing off his dancing skills with one of his Queens on stage.

Naija News understands that the Alaafin has more than ten wives, many children, grandchildren and great-grandchildren.

In the shared video, one of his young Oloris was spotted giving him a lap dance on stage at an event while cash rained on her.

Reacting to the video, some social media users expressed fear for the king due to the kind of dance which seemed too tasking for someone as fragile as him. While others revealed their curiosity over the level of attention young ladies pour at the king. Read more