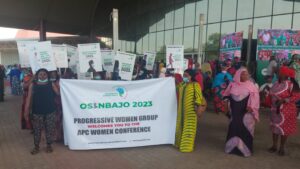 A coalition of women groups from different parts of the country on Tuesday stormed venue of the All Progressive Congress (APC) National Women’s Conference in Abuja to demands actualization of an Osinbajo presidency in 2023.

The coalition, which includes market women, farmers, traders, artisans and professionals, all voiced demand for Vice President, Prof Yemi Osinbajo, to become the APC presidential candidate in 2023 at the International Conference Centre.

The groups urged the party’s caretaker committee to ensure a properly organized national convention that would not be hijacked by money bags who had “participated in looting state or federal resources in the past.”

Osinbajo is yet to publicly admit any interest in the presidential race but he is believed to be interested in taking over from President Muhammadu Buhari.

Presidential aspirants within the APC who have declared their interest include Bola Tinubu, Orji Uzo Kalu and Governor Yahya Bello of Kogi States.

Hajia Rabi Dauda, leader of the Steering Committee of Women’s Coalition for Osinbajo, who spoke with reporters at the venue of the women conference in Abuja, said the women had assessed all aspirants across political parties and concluded that “Osinbajo is the best option for Nigerian women.”

She said, “We are rooting for Osinbajo, not because there are no other aspirants but because he is the most qualified and the one with the most easily predictable disposition towards development issues that are of utmost concern to women.

“Nigerian women trust Osinbajo more than any other presidential aspirant and he already has an idea of what the specific challenges of governance in present times really mean.

YOU MAY ALSO LIKE:   Blackmail of Dr. Olukoya & MFM: Maureen Badejo's Lies Exposed on Video

“ We believe that Osinbajo can consolidate upon whatever good foundation that Baba Buhari has laid and Nigerian women are much more optimistic about prospects for a better future under an Osinbajo presidency.

“At this APC National Women’s Conference and beyond here, we are urging all Nigerian women to actively mobilize support for Osinbajo in the interest of generations yet unborn because 2023 elections will leave very enduring impact on the fate of Nigeria.”

YOU MAY ALSO LIKE:   Primate Ayodele’s Warnings To South Africa Comes To Pass Few Days After Release Of Prophecy Book

Speaking in a similar vein, Madam Scholastica Dominic who led a group of market women to join the women’s coalition for a peaceful rally at the event stated that it was a voluntary demonstration of support.

“Besides, Osinbajo has demonstrated keen disposition towards seeing things from the perspective of market women and he can make things easy for us; indeed, we believe that he has great capacity to move Nigeria forward.”

YOU MAY ALSO LIKE:   Kaduna Govt Sacks 233 teachers, Schedules Fresh Competency Test For 12,254 Others

Leading the Inter-Faith group within the coalition, Evangelist Ochoja said the women were confident in Osinbajo’s readiness for the job unlike other aspirants.

She said the women would not be swayed by money because they believed strongly in Osinbajo who she said had “demonstrated capacity to serve with empathy.”