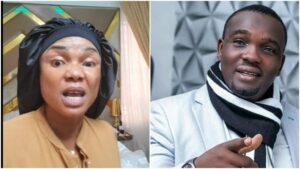 It was gathered that actor, Yomi Fabiyi has once again embarrassed actress, Iyabo Ojo moments after she slammed him with a N100 Million lawsuit for defamation.

Iyabo Ojo sued him because He spoke ill against her during the protest the actor organized yesterday for the release of Baba Ijesha, a veteran actor in the police net for defiling a minor.

In the placards, Yomi Fabiyi specifically told the police not to allow Iyabo Ojo and others dictate to them what they should do and that they should follow the law and release Baba Ijesha on bail.

On seeing this, Iyabo Ojo reacted with a N100 Million lawsuit against the actor who has also replied the actress.

In his response, He told Iyabo Ojo that she will not get any penny from him, and that she should rather save her money to eat and buy tiktok costumes else Lawyers will only extort her.

See his responses below