Home / cover / You Are A Bandit-Lover, Join Them In Zamfara For Sharwama – Femi Adesina Fires Back At Gumi

You Are A Bandit-Lover, Join Them In Zamfara For Sharwama – Femi Adesina Fires Back At Gumi 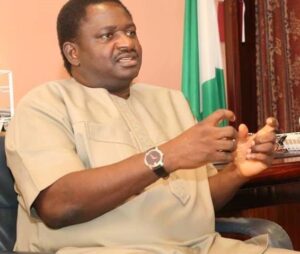 You Are A Bandit-Lover, Join Them In Zamfara For Sharwama – Femi Adesina Fires Back At Gumi

The Special Adviser to President Muhammadu Buhari on media and publicity, Femi Adesina has submitted that only those who decide not to be reasonably objective are saying the current administration is not doing enough in the fight against insecurity.

This is as he replied to a controversial Islamic cleric, Sheik Ahmad Gumi that the bandits attacking some regions in the country are surely going to hell and he knows this very well.

Adesina made the submission in an opinion article “I like this pampering. Don’t you?” which he posted on his Facebook page on Thursday night.

The article while praising the gallant efforts of the Nigerian military and other security agencies in the fight against insecurity, also countered an earlier submission by Gumi that the bandits are going nowhere.

It will be recalled that Gumi had on Monday claimed that the bandit terrorists in the northern region of Nigeria are going nowhere.

Gumi titled the post, ‘Zamfara: The Flaring Of Crisis’, military action against criminal herdsmen and bandits will not solve the security challenge, but “will only worsen the situation”.

YOU MAY ALSO LIKE:   BREAKING: Ex-Deputy Senate President, Ibrahim Mantu Is Dead

The cleric stated this while reacting to a recent victory recorded by the military over bandit terrorists in Zamfara forests.

He noted that the bandit terrorists are going nowhere and the action of the military will only worsen the situation in the northern part of the country.

But Adesina in his response said the criminals have missed the chance to repent and the offensive by the military won’t stop until the criminals are destroyed.

He said: “Before they got to this sorry pass, they had the chance to turn a new leaf. Zamfara, Katsina, and many other states offered dialogue. The governments tried to negotiate with them. But they were contumacious. Like dogs fated for destruction, they refused to hear the hunters’ whistle. They filled the land with sorrow, tears and blood, ‘dem regular trademark’ (as Fela Anikulapo-Kuti would say). Now, the shoe is on the other foot,” Adesina opined.

“In the different evil forests, when the Nigerian Air Force strikes from the sky, the remnants of the evildoers not killed immediately attempt to flee. The ground troops then pick them off like flies. I say it again. One has never been prouder of our troops. They are cleaning up the country.

“Shocking and disconcerting, however, that in the middle of all these, you still hear words meant to discourage our gallant soldiers. A bandit-lover is on record as saying military offensive would not work, and that the bandits “are going nowhere.” True? False. They are going somewhere. And that is: hell.”

YOU MAY ALSO LIKE:   FBN INSURANCE BROKERS HOSTS WEBINAR TO SENSITISE SMES ON RISK MANAGEMENT AND CYBER SECURITY

He added that though the battle has not been completely won, considerable progress has been made and should be appreciated.

He said: “Dr Okolo Oteri Eme is one of the women who love Buhari. To bits. She plays prominently on Facebook, and I love what she posted this week on the pounding the evil people have been getting: “Those who claim bandits are being pampered can join them for Shawarma in Zamfara. Kudos to our troops.”

“It’s promise made, and promise being kept by our President. He said those who trouble the country would be spoken to in the language they understand. It is happening now. The job is not fully done yet, but progress is fast and laudable. And the message is loud and clear. Don’t you like it?