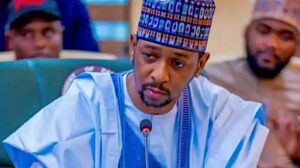 The Deputy Governor of Zamfara State, Mahdi Gusau has been impeached by lawmakers in the state House of Assembly.
The lawmaker impeached Gusau during plenary on Wednesday after the House received the report of the committee.

The Chief Judge of the state, Justice Kulu Aliyu, had set up a committee to investigate the allegations against Gusau.

YOU MAY ALSO LIKE:   Going Into Polygamy one of my greatest errors in life - Raymond Dokpesi

Okpeseyi while presenting the copies of the report to the Speaker said they were not empowered to talk about the report with any one.

He further stated “We have done our duty with utmost integrity and diligence and we have compiled this report based on the evidences we have gathered in the course of our duty.

The Speaker of the Assembly in his response to the report said they would work on the report with the context of section 188 of the constitution.

YOU MAY ALSO LIKE:   Okada Riders Clash With Task Force In Lagos

He then thanked the panel for discharging their duties in accordance with the law.

Twenty out of twenty-four lawmakers voted for the impeachment of the Deputy Governor on Wednesday.

There had been calls to impeach the Deputy Governor of the state following his refusal to dump the Peoples Democratic Party after the defection of the state Governor, Bello Matawalle.