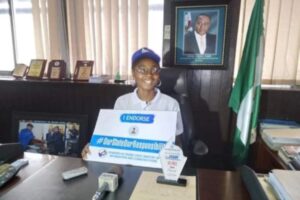 18-year-old girl made Commissioner of Information in Rivers

An 18-year old girl, Miss Sophia Oyibo Awajibene, was appointed as the Rivers State Commissioner for Information and Communication on Tuesday.

Miss Oyibo was honoured with the position after she was declared the winner of an intensive essay competition in the state.

Sophia defeated fourteen other contestants to rise to the top of the competition.

She was subsequently declared an Ambassador of the Rivers State Ministry of Information and Communication.

Miss Oyibo was presented with a cash prize of N60,000 and a plaque.

The incumbent Commissioner of Information and Communication, Paulinus Nsirim, who vacated the seat for the secondary school leaver for 30 minutes, stated that it was imperative to encourage young people, that they can become famous and earn good reputations through hard work, honesty and integrity and not just via ‘Big Brother Nigeria’.

Nsirim said: “I got feedback that made me feel very bad about the prizes we were to give the winners. People asked, why would the prizes for an intellectual competition be N50,000, N30,000 and N20,000.

“They said, didn’t I see how much they are getting in Big Brother but that is a sad commentary about our country today, everything is monetised.”

Nsirim, however, said the ministry intends to inculcate the right values through essay competition and also showcase to the world that the right values can make someone become famous and a model to others.
Sophia Oyibo was made the Rivers state Commissioner for Information and Communication

YOU MAY ALSO LIKE:   'I will return tithes and offering of members Still Living In Sin' - Pastor Kumuyi

The State Commissioner for Education, Prof. Kaniye Ebeku and his Youths Development Counterpart, Prince Ohia, expressed delight at the performance of the winner, stating that education remains the bedrock of any society that desires advancement.

Tags 18-year-old girl made Commissioner of Information in Rivers

Previous You Can’t Win 2023 Presidency With A Northern Candidate – Momodu Tells PDP
Next Hide Your Wives, Sisters, Boma BB Naija Warns As He Resorts To Live Up To His Infamous Reputation