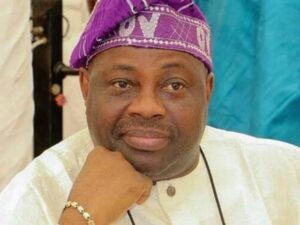 The founder of Ovation Media Group, Dele Momodu, says the opposition Peoples Democratic Party (PDP) has a better chance of winning the 2023 presidency if it picks its presidential candidate from the South.

In a recent interview, Momodu noted that the opposition party cannot reclaim the Presidency if it fields a Northerner as its presidential candidate in 2023.

Momodu stated that the North will never get anybody who is as popular as President Muhammadu Buhari that can conveniently win elections in a long time to come.

The former presidential candidate also appealed to former vice president Atiku Abubakar not to contest in the 2023 general elections due to his age.

He said: “By 2023, Atiku would have been contesting for 30 years. I love him. He is a businessman; among all of them, he has been able to run his business successfully. But are we going to leave Buhari who is almost 80 and go to someone who is almost 80? The reason I think PDP has a better chance is that anyone who can pick a candidate from the South will definitely win.

“Contrary to the boastfulness of the northern politicians, they will never get anybody from the North who is as popular as Buhari in a long time to come. Buhari contested three times and twice he was defeated by southerners: first by Obasanjo and later by Jonathan. This is because the North’s catchment area is between North-West and North-East.

“My thinking is that if there will be elections, I have told my friends (Kingsley Moghalu, Omoyele Sowore) that it would take a miracle for a third force to win election in a country that is as complex and complicated as Nigeria.

“We are left with only one option. If APC is so bad that you don’t want to touch it, the only other option, for now, will be PDP, unless the party breaks up and you have a new re-alliance as it happened with the APC. Anything other than that, the two formidable parties at the national level will be APC and PDP.”

YOU MAY ALSO LIKE:   DStv, GOtv subscription: Tribunal directs Multichoice to revert to old prices

He stated that the ruling APC should be punished for mismanaging the country and creating division among the regions that make up Nigeria since taking over power in 2015.

The media mogul asked Nigerians not to vote for the ruling All Progressives Congress (APC) nor any of its candidates in the forthcoming elections.

Momodu blamed President Buhari and the ruling party for the current security challenges facing the country and the economic hardship experienced by the citizens.

YOU MAY ALSO LIKE:   We are Considering Taxing Soft Drinks - Finance Minister

He said: “APC should be punished for the mismanagement of Nigeria in the last six and half years. If you fail an exam, you do not get promoted. If you fail, sometimes you can get rusticated if your results are so bad and the school gives up on you. The way Nigeria is today, we are just on the brink of collapse. Buhari has led us to the Golgotha.

“The greatest party in Nigeria is neither the APC nor the PDP. They are just formidable because they are the ones who practice politicking.

“What is needed now is someone who can bring the floaters party on board. Those are the youths. Many people don’t vote. This is because the people do not find anybody whose message resonates with them, whose face is familiar to them.“