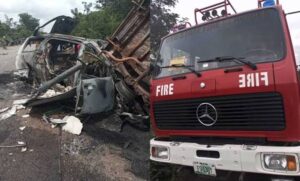 No fewer than 20 passengers perished at Lanlate in Ibarapa East Local Government Area on Friday when two commercial vehicles collided.

It was gathered that the two vehicles which were loaded were travelling on the opposite direction when they collided and burst into flames.

The vehicles and the occupants were reportedly burnt to death while two lucky ones were rescued with injuried from the wreckage.

Eye witnesses blamed the accident on over speeding, telling our correspondent that there were weeping and wailing at the scene as sympathisers thronged the scene.

The Chairman, Ibarapa East Local Government Area, Mr Gbenga Obalowo, was said to have led rescue operation at the scene.

Obalowo said, “It was a very terrible accident. It was a gory sight. We counted over 20 bodies that were burnt completely.

“I learnt the vehicles had a head on collision and the two vehicles, a commercial bus and a Sienna which was also conveying passengers caught fire and got burnt beyond repair.

“Our drivers need to avoid speeding. They should consider other road users and avoid reckless driving.”