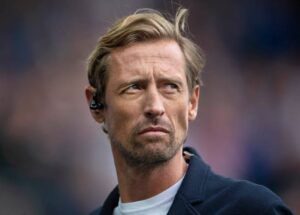 Premier League executive, Richard Masters declared on Friday that organizers and clubs would like to pay tribute to Her Majesty’s long and unwavering service to England.

He said it was important to join others in mourning the passing of the nonagenarian who according had an extraordinary life and contributed immensely to the nation.

Reacting, however, Crouch said on Friday that there are better ways to honour the Queen than postponing matches that have been scheduled for this weekend.

The former player who expressed his thought on Twitter said: “I know it’s only a game and some things are much bigger but imagine all our games went ahead this weekend.”

Naija News reports that Britain’s longest-reigning monarch and the nation’s figurehead for seven decades died on Thursday at age 96.

YOU MAY ALSO LIKE:   Man Who Was Sentenced To Death Commits Suicide In Kuje Prison

Bank Of England Reveals What Will Happen To Existing Pound Notes With Queen’s Image
The Bank of England disclosed on Friday that banknotes bearing the late Queen Elizabeth’s image will still remain legal tender until further communication on the matter is made.

“The Queen died peacefully at Balmoral this afternoon,” Buckingham Palace said in a statement.

YOU MAY ALSO LIKE:   I Used To Be A Bus Conductor, I have 5 Adopted Kids – Singer, Small Doctor recounts humble Beginning

“The King and The Queen Consort will remain at Balmoral this evening and will return to London tomorrow.”

A documentary by Business Insider in 2020 on the order of events after Elizebeth II’s death revealed the funeral will most likely take place 10 days after the Queen’s death.

On the day of the funeral, the London Stock Exchange will close, as will most UK banks. But there are arguments about replacing currencies bearing the Queen’s image.

YOU MAY ALSO LIKE:   DSS Bars Vanguard, PUNCH, Others From Kanu’s trial

The Bank of England said in a statement, “As the first monarch to feature on Bank of England banknotes, the Queen’s iconic portraits are synonymous with some of the most important work we do.

“Current banknotes featuring the image of Her Majesty The Queen will continue to be legal tender. A further announcement regarding existing Bank of England banknotes will be made once the period of mourning has been observed.”