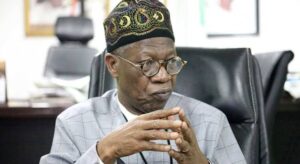 Nigeria’s Minister of Information, Lai Mohammed has said that the #EndSARS Massacre is False.

Mohammed, in a lengthy statement on Wednesday described the narrative that there was a massacre of protesters by Soldiers at the Lekki toll gate on October 20th, 2020 as ‘Fake News’.

Below is a full transcript of the statement;

Good morning gentlemen and welcome to this press conference.

Today marks the first anniversary of the phantom massacre at Lekki Toll Gate in Lagos, which was the culmination of an otherwise peaceful protest that was later hijacked by hoodlums. At earlier press conferences, I had called the reported massacre at the toll gate the first massacre in the world without blood or bodies. One year later, and despite ample opportunities for the families of those allegedly killed and those alleging a massacre to present evidence, there has been none: No bodies, no families, no convincing evidence, nothing. Where are the families of those who were reportedly killed at the toll gate? Did they show up at the Judicial Panel of Inquiry? If not, why?
Sadly, the champions of a massacre at the Lekki Toll Gate, including Amnesty International and CNN, have continued to shamelessly hold on to their unproven stand. Recall, gentlemen, that after bandying different figures, Amnesty International finally settled at about 12 people killed. On its part, CNN went from 38 people killed to two to just one, after a supposed global exclusive even when the network had no reporter on ground at the Lekki Toll Gate on Oct. 20th 2020.
On Monday, the Judicial Panel of Inquiry that was set up by the Lagos State Government after the EndSARS protest wrapped up its sitting. During the sitting, CNN was summoned but it never showed up, thus missing a great opportunity to prove its allegation of massacre at the toll gate. Also, Amnesty International had a golden opportunity to convince the world, but it rather opted for issuing meaningless press releases.
In its latest attempt to grasp at straws and redeem whatever is left of its battered credibility on this issue, CNN has continued with its baseless report that soldiers shot at protesters. In a report currently running on the network, CNN brazenly and unashamedly held on to its flawed narrative, relying on an unidentified mother whose son was reportedly shot dead at Lekki, but without convincing evidence of who shot him dead. The same CNN that tweeted on Oct. 23rd 2020 that 38 people were shot dead at Lekki is now struggling to convince the world that one boy was killed at Lekki. What a shame!
The testimony of ballistic experts before the Judicial Panel of Inquiry in Lagos contradicts the tales by the moonlight by Amnesty International, CNN, a runaway DJ and their ilk. The experts, in their testimony, said inter alia:
”The Team finds that from the medical data examined, including the timeline of arrival at medical facility and the nature of the injuries sustained by the Victims, who were taken to the 5 medical facilities, that no military grade live ammunition (high-velocity) was fired at the protesters (emphasis mine) at Lekki Tollgate on 20th October 2020, within the timeframe of reference (18.30-20.34hrs). That the GSW (Gun Shot Wounds) injuries (4 in number between 19:05 and 19:45 hrs), which were examined by the Team, can be safely identified as being discharged by either low velocity caliber and/or artisanal/12-gauge firearms (artisanal firearms are locally-fabricated weapons). What is however certain is that had the military personnel deliberately fired military grade live ammunition directly at the protesters; there would have been significantly more fatalities and catastrophic injuries recorded. This was clearly not the case.” (emphasis mine)
The ballistic experts are not alone in reaching that conclusion. In its 2020 Country Report on Human Rights Practices, the U.S. State Department wrote:
“On Oct. 20th (2020), members of the security forces enforced curfew by FIRING SHOTS INTO THE AIR (emphasis mine) to disperse protesters, who had gathered at the Lekki Toll Gate in Lagos to protest abusive practices by the Nigeria Police Force Special Anti-Robbery Squad (SARS)

“Accurate information on fatalities resulting from the shooting was not available at year’s end. Amnesty International reported 10 persons died during the event, but the government disputed Amnesty’s Report, and NO OTHER ORGANIZATION WAS ABLE TO VERIFY THE CLAIM (emphasis mine).”

ii) Amnesty International, CNN, a runaway DJ and others like them should apologize for misleading the world that there was a massacre at the Lekki Toll Gate and for portraying the Nigerian military, police and other security agencies in bad light.

iii) CNN acted unprofessionally by relying on unverified, and possibly-doctored social media videos, as well as other open-source information, to conclude that a massacre took place at the toll gate.

iv) The Federal Government remains proud of the security agencies for acting professionally and showing utmost restraint all through the EndSARS protest and the ensuing violence, an action that saved lives and properties.

v) The six soldiers and 37 policemen who died during the EndSARS protests are human beings with families, even though the Human Rights Organizations and CNN simply ignored their deaths, choosing instead to trumpet a phantom massacre.

YOU MAY ALSO LIKE:   145-Man Committee Set Up For Yusuf Buhari Wedding, Emir Coronation

OTHER ISSUES RELATED TO ENDSARS

The National Economic Council (NEC), which comprises all State Governors and representatives of the Federal Government, and chaired by the Vice President, has already addressed other issues relating to the EndSARS protest.
At its meeting on 15 October 2021, the NEC received an update on the Reports of Judicial Panels of Inquiry into Allegations of Human Rights Violations against Members of Nigeria Police Force and other Security Agencies. Note that 28 States and the Federal Capital Territory (FCT) – under the auspices of the National Human Rights Commission – had set up Judicial Panels/Commissions of Inquiry to investigate allegations of violations of human rights levied against members of the Nigeria Police Force and other security agencies, especially members of the disbanded SARS.
Out of the 28 States, 11 States (Abia, Ekiti, Enugu, Gombe, Kwara, Nasarawa, Ogun, Ondo, Osun, Plateau, and Rivers) have submitted their final reports to Council. Governors of other States have also indicated that their reports would be submitted soon. Following deliberations on the recommendations of the panels, NEC agreed/resolved as follows:
PAYMENT OF COMPENSATION TO VICTIMS
Each State, in collaboration with the Federal Government, shall establish modalities for the settlement of all monetary compensations awarded by the Panels. Already, as resolved by NEC, a number of States have set up Victims Compensation Funds, from which several victims have already received payments of sums awarded to them by the panels.

PROSECUTION OF INDICTED PERSONS (SECURITY PERSONNEL AND CIVILIANS)
Council directed State Governors to immediately forward copies of final reports of the panels to their Attorneys-General for prompt arraignment and prosecution of all indicted persons. Where incidents in the reports relate to matters of discipline, in addition to prosecution, NEC urged the Nigeria Police Force to take disciplinary action on the affected officers in line with the provisions of the Police Act 2020.

IMPROVED EFFICIENCY OF NIGERIA POLICE FORCE AND OTHER SECURITY AGENCIES’ ARCHITECTURE
NEC called on the leadership of the security agencies to ensure that –
a. Persons recruited into arms-bearing security agencies undergo psychiatric evaluations and drug tests before enlistment and periodically after enlistment to ensure that the personnel are psychologically fit to carry live weapons and to identify behavioural tendencies that may require psycho-social interventions.
b. Personnel of the agencies dutifully observe Rules of Engagement in the discharge of their functions/duties around and within the civilian populace.
c. While acknowledging the various initiatives introduced by the Federal Government to:
*strengthen police accountability through the Police Service Commission,
*sustain improved funding and budgetary allocation to the Nigeria Police Force and other securities agencies,
*and the lifting of the ban on recruitment of police officers, Council urged the Federal Government to give priority to the general welfare of police officers and personnel of other security agencies. In particular, it advocated the review of pension and gratuity of retired police officers and attainment of parity of remuneration by police officers with sister security agencies.
d. Undertake a comprehensive assessment of all police stations across the country with a view to ensuring that they are fit for purpose.
e. Nigeria Police Force and other security agencies should deploy cutting-edge technology in the fight against crimes.
f. Nigeria Police Force to, in line with the mandatory training provisions of the Police Act 2020, prioritize training of Police Officers on procedures for the entrenchment of Human Rights Provisions guaranteed by the Constitution and on the professional handling of weapons.
g. All those detained by the Police as a result of the EndSars protests are expeditiously processed with due regard to the principles of fair hearing.
h. The system established within the Nigeria Police Force for receipt and handling of complaints or petitions is strengthened, and all police officers on duty should be in police-approved uniform with their full names and force numbers boldly written for easy identification.
i.The States should, as resolved by NEC:

YOU MAY ALSO LIKE:   Let us Join Hands in shutting down Nigeria on October 1 – IPOB begs Oduduwa agitators, others

Properly utilize and support the community policing programme of the Federal Government, with active collaborative efforts and participation of traditional rulers, elders, youths, vigilante groups, etc.;
Establish standing committees under States Ministries of Justice to address human rights violations on a continuous basis; and
Take measures aimed at flushing out miscreants squatting in uncompleted buildings, and other blackout spots that serve as hideouts for criminals.
Of course, NEC also issued an advisory on public protests to mark the first anniversary of the EndSARS protest. While appreciating the role of lawful peaceful protests in the advancement of public discourse under democratic governance, the NEC strongly advised those planning public protests across the country to mark the EndSARS’ anniversary to consider other lawful alternative means of engagement, especially because of the current security situation across the country and the possibility of such protests being hijacked by armed hoodlums and other opportunistic criminals to cause mayhem.
Finally, NEC also pointed out the various actions already taken by Federal and State Governments to address the grievances that led to the 2020 protests, including:
the disbandment of SARS;
*broad police reforms;
*establishment of judicial panels of inquiries to investigate allegations of human rights violations by members of the Nigeria Police Force and other security agencies;
recommendations of which panels are already at various stages of implementation including the setup of Victims Compensation Funds from which several victims have received payments of sums awarded to them by the panels;
*and prosecution of police personnel indicted by the panels.
Gentlemen, I thank you for your kind attention.

Previous EndSARS Anniversary: Saraki Tackles Govt Over 5 For 5, Other Promises Made During Protest
Next EndSARS Memorial: Don Jazzy, Others Call Out Sanwo-Olu As Police Assaults Uber Driver