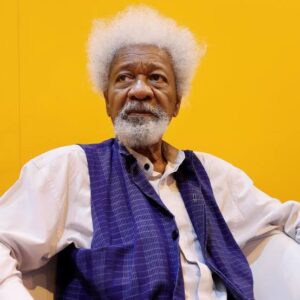 Twenty years after the murder of a former Attorney-General of the Federation and Minister of Justice, Chief Bola Ige, Nobel laureate Wole Soyinka yesterday challenged the Federal Government to show the report of the investigations of the dastardly act.

In a letter to Mrs Funso Adegbola, daughter of the late Ige, Soyinka recalled that President Muhammadu Buhari had pledged to open an inquiry into the spate of political murders in the country.

The letter was in commemoration of the 20th anniversary of the killing of the politician, who was also the governor of old Oyo State between 1979 and 1983.

Discussants at the event tagged: ”Ige Memorial Symposium”, which was held in Lagos— Chief Adeniyi Akintola (SAN), Dr. Olu Agunloye, Bayo Aina, and Awa Bamiji — urged government to fish out those behind the killing.

Ige, popularly known as Cicero of Esa-Oke, was shot dead on December 23, 2001at his Ibadan residence, shortly after his security aides allegedly went out for a meal.

Former President Olusegun Obasanjo deployed troops in the Southwest to prevent a violent reaction to the murder. He also ordered a probe of the killing, but the suspects were discharged and acquitted.

In the letter, Soyinka pointed out that unsolved crimes do not only lead to a culture of impunity, but put the nation at risk.

Lamenting that “this is a lesson that Nigerian leadership has yet to learn,” the playwright asked Buhari to “share the rewards” of his ”investigations – if any.”

YOU MAY ALSO LIKE:   Traffic robbers attack Actress Kemi Afolabi  On Lagos-Ibadan Express

The letter reads: “President Muhammadu Buhari, what has become of your robust pledge to open an enquiry into the spate of political murders that the nation has undergone in recent years?

“Does it all amount to yet another instance of political bravado? While we all accept that all lives should be valued equally, some impose a special responsibility on those in governance. Bola Ige, as the nation’s minister of justice, and United Nations’ civil servant designate was unarguably one such.

“A nation’s honour is in question and remains so until the hour of closure. Thus, she must never relent in demanding an explanation for his brutal murder, expose the perpetrators, identify the conspirators and reinstate the broken lines of justice.

“At the very least, we need a formal declaration regarding those who displayed an abnormal interest in the fates of those accused, to a level of proven, documented interference both in the investigative process and within the judiciary.

“I am not alone in having written and lectured on these sordid aspects that fuelled the subversion of justice. There are surviving witnesses.”

YOU MAY ALSO LIKE:   Atiku Faults Buhari govt, Describes it As monumental failure

Akintola blamed the Nigerian factor for the inability of the government to find Ige’s killers.

The senior lawyer said whenever he drives past the late minister’s office in Ibadan, “ a series of unanswered questions flood” his mind.

“These and many more questions trouble my mind and leave me in a perpetual state of confusion. His assassination in his home at Bodija, Ibadan was definitely the climax of assassinations in Nigeria and Africa as a whole and the foundation for various security challenges that we, as a nation, have been confronting since then and till this day.”

Agunloye, a former of Power and Steel Minister, said “the killing of Uncle Bola was brutal, senseless and barbaric, hurting and hurtful.”

He added: “As we celebrate the man who loved us with passionate commitment, let us get some basic aspects clear. The first is that Bola Ige did not kill himself. He met his killer face to face and he dealt him a fatal single shot aimed at his heart.

“Therefore, someone or some people assassinated him. God caught them in the act and God knows them but a majority of us are waiting for justice while some of them are perhaps believing that they have got away.”

Also, Aina said it is unfortunate that the killers of the late Ige are still roaming freely.

Aina, who is the secretary-general of Afenifere – Egbe Ilosiwaju, said it was imperative for Nigeria to turn a new leaf by evolving into a country where nobody can get away with murder.

His words: ”If Nigeria were to be a country where people cannot get away with murder, we would have found the killers of Bola Ige and Funsho Williams.”

Bamiji, the executive president of Bola Ige Centre for Justice, organisers of the event, said the body “won’t rest until justice is done in this most famous murder case in Nigeria and numerous others.”

Previous Buhari Expresses Grief As 45 Farmers Are Murdered In Nasarawa State
Next “My Intention Is To Kill Bandits, Send Them To God” – Gov. El-Rufai Reveals