2022 ERUKU ANNUAL YAM FESTIVAL: OUR CULTURE, OUR HERITAGE, OUR PRIDE

2022 ERUKU ANNUAL YAM FESTIVAL: OUR CULTURE, OUR HERITAGE, OUR PRIDE 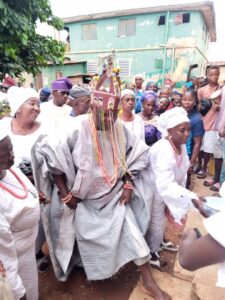 The annual yam festival of the Erukuans again witnessed mammoth crowd of young, old and dignitaries across the neighbourhood as EPA, EFON appeared to entertain the crowd for the three days celebrations, while ‘Agan’ would comes out at night after the grand finale. The event is fully back again after eight-year lull due to the reasons wouldn’t want to mention on the news circle.

The Eruku annual yam festival is an annual event that brings sons and daughters of the Erukuans together in unity to celebrate yam festival which dates back to the 19th century.

According to history, the festival had its origin from our forebears with the intention to bring peace and unity into the community and not an harmful things as many thoughts or beliefs. History has it that in the 19th century there are families within Eruku community who are the real originators, in advancement for the worshiping of Female EPA and Male EPA the reigning monarch then supported and gave freehand to practice without hindrance even till date.
It was in appreciation of this gesture by the Monarch who will always comes out during the event in his full regalia, and made it a point of duty to dance round through the market and to pay homage down to his sons and daughters

But today the festival has gone beyond what it used to be. All sons and daughters of Erukuland, home and in diaspora, irrespective of their religious differences look forward to the festival as we bring new innovations to this heritage.

“I remember when I was young and in primary/secondary school, I would leave my house in Odolomu compound at Balogun House as early as 5 pm and walk all way to Oke ogi just to join other children that will hold leaves and be singing and dancing. It was such fun for us then because it allowed us to join in the colorful festival and to learn more about our culture also meet old friends seeing our Kaabiesi Owa of Eruku in his full regalia with his chiefs and his mothers (Iye Oba) who will also appeared in full White attire”.

The major highlights and attractions of the Eruku annual yam festival are the parades of the Owa and his Chief with those agedwomen ( Age Grades) and the equestrian displays of the EPAs, Efon dancing along with the families couples with the traditional drums (Eku)

Watch out for the grand finale today as major Television stations, other press men would be granted exclusive interview by the Owa of Erukuland for full and future documentary which would later be shown on DSTV & STARTIMES. The allotted date, time shall be communicated shortly