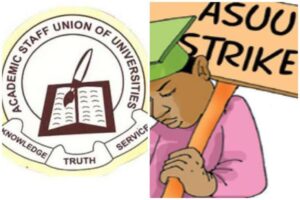 The strike embarked upon by the Academic Staff Union of Universities (ASUU) has been extended by another four weeks.

The development was confirmed on Monday in a statement by the ASUU President, Professor Emmanuel Osodeke on behalf of the union.

Naija News reports the decision to extend the strike was reached at the end of the union’s National Executive Council meeting held at its national secretariat in Abuja on Sunday and concluded in the early hours of Monday.

ASUU explained that the time extension is to allow the federal government enough time to meet their demands.

The statement signed by Osodeke reads in part: “following extensive deliberations and taking cognisance of Government’s past failures to abide by its own timelines in addressing issues raised in the 2020 FGN/ASUU Memorandum of Action (MOA), NEC resolved that the strike be rolled over for four weeks to give Government more time to satisfactorily resolve all the outstanding issues.

YOU MAY ALSO LIKE:   Incredible! Tiwa Savage Confess She Attempted Suicide Twice

Origin And Timeline Of Current ASUU Strike
ASUU embarked on a one-month strike on February 14, 2022, over a series of disagreements with the federal government and non-implementation of agreements.

The strike was extended on March 14 by two months, Naija News recalls.

The strike was further extended after the two months expired and has now entered its 168th day as at August 1, 2022.

YOU MAY ALSO LIKE:   Wike’s Camp Fumes As Atiku Picks Okowa Running Mate

Some of the issues causing disagreement between ASUU and the federal government are the demand for the adoption of the University Transparency and Accountability Solution (UTAS) instead of the Integrated Personnel Payroll Information System (IPPIS), payment of revitalization fund, the poor funding of universities, non-payment of salaries and allowances of some university lectures, as well as the non-payment of earned academic allowance to lecturers, among other issues.