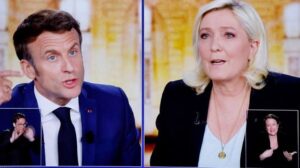 First-round voting results between the top two contenders, Macron and Len Pen are shown below:

Emmanuel Macron of the Republic on the Move polled 9,783,058 in the first round of France’s 2022 presidential election, earning 27.8% count of the total votes.

This led to Sunday’s second-round runoff which secured Macron another tenure in leadership.

As projected by French polling agencies, 44-year-old Macron garnered between 58.5 per cent of the vote in the second-round runoff to beat down 41.4% vote for Le Pen.

The latest victory for Macron makes him the first president in France to have won re-election since Jacques Rene Chirac who served as President of the European country from 1995 to 2007.

Len Pen on the other had lost against the incumbent president for the second time, Naija News understands.

YOU MAY ALSO LIKE:   Oyo Govt Slams EFCC Over Arrest Of Accountant-General

She was defeated in the 2017 France Presidential election after earning just 33.90% of the total votes, against Macron’s 66.10%.

Speaking on his latest victory, Macron acknowledged the love from his loved ones and the entire residents of France.

He vowed to improve the living standards of the less privileged.

YOU MAY ALSO LIKE:   Morola Babalola, The Maven Of Real Estate Business In Nigeria

“Many in this country voted for me not because they support my ideas but to keep out those of the far-right. I want to thank them and know I owe them a debt in the years to come,” the 44-year-old said.

He assured the people that he will address the “anger and the disagreements” that led to many French voters choosing the extreme right, saying “this will be my responsibility and that of those around me”.

YOU MAY ALSO LIKE:   We Don’t Give Preferential Cut-off Marks To Northerners – JAMB Replies El-Rufai

“No one in France will be left by the wayside,” he continued, pledging to be a “president for all”, Macron added.