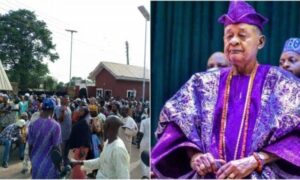 Some residents of Oyo town who thronged the Oyo Palace to mourn the death of the Alaafin of Oyo, Oba Lamidi Adeyemi on Saturday were stung by bees.

This happened around 10 am after Islamic clerics had arrived at the palace in preparation for the burial of Oba Adeyemi, who died on Friday night.

Our correspondent observed that to ward off the attacking bees, residents in the open space in the palace who were affected plucked tree branches and leaves to drive the unwanted creatures away.

A policeman was one of the victims and some of the mourners assisted him to drive away the bees and removed some of the insects which got stuck in his uniform.

Meanwhile, the Oyo State Governor, ‘Seyi Makinde, on Saturday, described the death of the Alaafin of Oyo, His Imperial Majesty, Oba Lamidi Adeyemi III, as “a huge loss to the state, Nigeria and the Yoruba race”.

Makinde, while describing Oba Adeyemi’s death as a personal loss to him, said that he was “an ever-supportive royal father and a worthy leader, who spared nothing in trying to make Oyo State and Nigeria greater”.

The governor, in a statement by his Chief Press Secretary, Mr Taiwo Adisa, said, “Kabiyesi’s words of advice and guidance were always golden and helpful”.

Makinde expressed his condolences to the Oyo State Traditional Council, the Oyomesi, Oba Adeyemi’s immediate family, the people of Oyo Kingdom and the entire Yoruba race.

YOU MAY ALSO LIKE:   Buhari Expresses Grief As 45 Farmers Are Murdered In Nasarawa State

The governor, however, prayed to God to grant repose to the soul of the departed traditional ruler.

According to Makinde, apart from Oyo State losing its last man standing in the rank of experienced monarchs with long years of royal leadership, it has also lost a royal institution and an authority, which Alaafin Olayiwola Adeyemi III had become by virtue of his high-octane understanding of Yoruba history, politics and national development.

YOU MAY ALSO LIKE:   How Seven-Year-Old Ekiti Girl was stabbed multiple times, kept inside cooler for days in pastor's house (Video)

He said, “I have been informed about the death of our father, His Imperial Majesty, Iku Baba Yeye, Oba Lamidi Olayiwola Adeyemi III.

“I express heartfelt condolences to the Oyo State Council of Obas and Chiefs, which Oba Adeyemi chaired for decades, the Oyomesi and the entire people of Oyo Kingdom.

Read Also
Oyo Chief Imam, others arrive palace for Alaafin’s burial
Alaafin to be buried today -Oyo Mesi
Alaafin’s death: Tears as sympathisers throng Oyo palace
“I equally commiserate with the Oloris, children and entire Adeyemi family on the demise of their patriarch and worthy father.

“Kabiyesi’s departure is a huge loss not only to Oyo State, to which he committed 52 years of his life as the Alaafin of Oyo Kingdom, but also to Nigeria and the entire Yoruba race.”

According to him, Oba Adeyemi was our last man standing in the rank of most eminent royal fathers with long years of leadership.

“He became a golden king, an institution and an authority rolled into one by virtue of his immense experience, wisdom and understanding of Yoruba history, royalty and politics.

“Oba Adeyemi, not only elevated the Alaafin throne with his knowledge and wisdom, he became a worthy exemplar for royal leadership in Africa and brought glory to Oyo State and Nigeria.

“Kabiyesi never spared anything in his strive to make Oyo State greater and to bring about the Nigeria of everyone’s collective dream.

“Personally, Kabiyesi’s death is a great loss to me, because he proved to be a worthy father and had been ever so supportive of our government.

“His words of advice and guidance were always golden and helpful.

“It is my prayer that God accepts Kabiyesi’s soul into Aljanah Firdaus and uphold everyone and everything he left behind. Good night, Iku Baba Yeye !”