What Atiku Said About Late Alaafin Of Oyo, Oba Adeyemi 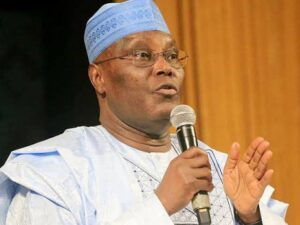 Former Vice President and Presidential aspirant Atiku Abubakar has reacted to the death of the Alaafin of Oyo, Oba Lamidi Adeyemi.

It was earlier reported that Oba Adeyemi had died on Friday night in Ado Ekiti, Ekiti State Capital after a brief illness.

It was gathered that the Yoruba traditional ruler was reportedly receiving treatment at the Afe Babalola University Teaching Hospital, Ado Ekiti where he later died.

It was disclosed that the rites of passage have started for Alaafin who reigned for 52 years.

Reacting in a statement by his spokesperson Paul Ibe, Atiku stated that the Alaafin was a worthy ambassador of Yoruba culture.

While describing his death as a great loss for Nigeria and Africa culture at large, the PDP chieftain said that the late Oba Adeyemi was a worthy ambassador of Yoruba culture and royal elegance.

Atiku recalled that his last encounter with Oba Adeyemi was in Ibadan during the coronation of Olubadan of Ibadan, Oba Lekan Balogun.

“I admired the royal splendour of Oba Adeyemi and the fact that he remains the longest serving Alaafin means that Oyo and indeed Nigerians will not forget his reign,” the Waziri of Adamawa said.

YOU MAY ALSO LIKE:   Weeks after T B Joshua’s Visit To South Sudan: President and Opposition Leader Sues For Peace

Atiku noted that he is deeply touched by the news of Oba Adeyemi’s demise, sending his condolences to the immediate family, Governor Seyi Makinde and the people and government of Oyo State.

He prayed to Allah to grant the soul of the late king a gentle repose and to give his immediate family and the people of Oyo Kingdom the fortitude to bear the loss of a great monarch.