Home / cover / 2023: Amosun Speaks on Stepping Down For Tinubu, Others

2023: Amosun Speaks on Stepping Down For Tinubu, Others 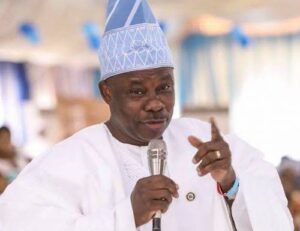 Former Governor of Ogun State, Senator Ibikunle Amosun has declared that he is not in the presidential race to align with Chief Bola Tinubu or any other aspirant of the All Progressives Congress (APC).

The former governor also said he did not obtain the APC senatorial form, neither did he attend the screening exercise organised for APC senatorial aspirants, as being peddled by some individuals.

YOU MAY ALSO LIKE:   Woman kills husband’s nephew with knife

TRIXX NG recalls that some media houses over the weekend reported that there were rumours that Amosun had agreed to step down for Tinubu, having been screened and cleared for the Ogun Central senatorial race.

But, in a swift reaction, Amosun debunked the rumour spreading on social media, saying the “two news stories are false.”

According to a statement signed by his media aide, Bola Adeyemi, he said that the Ogun Central Senator “procured only the forms for the presidential ticket of the APC and did not attend the screening exercise for Senatorial aspirants because he is not one.”

While urging Nigerians to dismiss the “false news”, Adeyemi maintained that “Amosun is in the race for the presidential ticket of the APC and has no plans to align with any politician in the race.”

Tags 2023: Amosun Speaks on Stepping Down For Tinubu

Previous Deborah Samuel: Buhari’s Daughter Advises Muslims On What To Do When Faced With Blasphemy
Next ISSAN Forum: Experts Raises Alarm Over Brain Drain Of Digital Skills In Africa