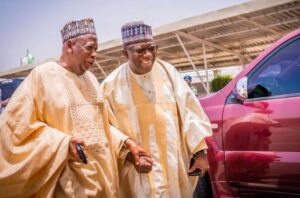 The Governor of Ekiti State, Kayode Fayemi on Tuesday visited his counterpart, Governor Abdullahi Ganduje of Kano State as part of his consultation in order to emerge as the President of Nigeria in 2023.

Naija News had earlier reported that the Chairman of the Nigeria Governors’ Forum declared his intention to contest under the All Progressives Congress (APC) in 2023.

Fayemi in a post on his Facebook account on Wednesday revealed that he visited Governor Ganduje and the Governor of Nasarawa State, Abdullahi Sule on Tuesday.

According to the Ekiti State Governor, he visited the APC Governors for further consultations regarding the APC Presidential Primary election.

He said, “The meetings provided an avenue to listen to and exchange ideas on the best approaches to advance the frontiers of the national agenda.”

Fayemi would be hoping to clinch the presidential ticket of the ruling party ahead of the likes of the National Leader of the party, Bola Tinubu, Vice President, Yemi Osinbajo, Minister of Transportation, Rotimi Amaechi, Minister of Labour and Employment, Chris Ngige, Governor of Kogi State, Yahaya Bello and several other aspirants in the party.