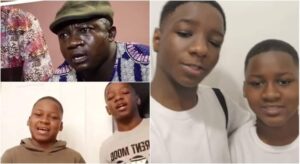 Veteran comic Yoruba Nollywood actor Olaniyi Afonja popularly known as Sanyeri has wowed many Nigerians with videos of his children that surfaced online.

Sanyeri is a household name in the Yoruba genre of Nollywood and has left many lovers of indigenous movies glued to him due to his funny character.

Unarguably, Sanyeri’s level of education is a major hindrance in his career, as it restricts him from taking up major English-speaking roles.

However, a video of Sanyeri’s children that surfaced online shows they are currently living outside Nigeria.

For someone who had faced some limitations because of his education, Sanyeri decided to change the narrative and many Nigerians were left speechless with the video of his children.

The video captured the kids of the veteran. actor pleading with fans to support their father by subscribing to his Youtube Channel

Reacting to the video, many Nigerians claimed that Sanyeri married a beautiful wife to produce such cute children and every kid deserve a better life than the parents.

rich___kinging wrote: “He changed the generation”.

YOU MAY ALSO LIKE:   Igbos Creating A monster in Nnamdi Kanu - Popular Activist

naimafit_ wrote: “Woooow your kids deserve better lives _ because you struggled don’t mean you treat them with comparison or allow them go through the same . It’s was your decision to BIRTH THEM so TAKE CARE OF THEM WELL … I’m impressed”.

pappyfaiithgram wrote: “Aww I’m so happy for this man , Daddy didn’t fine but Him Pinkin like am”.