Home / cover / 2023: Key Promises Made By Fayemi In His Presidential Declaration Speech

2023: Key Promises Made By Fayemi In His Presidential Declaration Speech 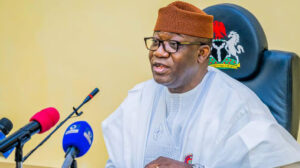 The Governor of Ekiti State, Kayode Fayemi, on Wednesday made ten promises to Nigerians if elected the next President in 2023.

He made the promises in his presidential declaration speech read to his supporters and members of the All Progressives Congress (APC) at the Hilton Hotel in Abuja.

Below are the ten promises made by Governor Fayemi.

1. Programmatically, as the standard-bearer of the All Progressives Congress, I will be leading the implementation of a holistic and integrated response to the multifaceted security crises confronting us. To this end, the retooling of our armed forces, intelligence agencies, and border guards will be pursued in tandem with an overhaul of our policing system and the phasing in of bold universal social policies that will enable us decisively tackle poverty and upgrade human capital and security.

2. To give full effect to concrete programmes of action that will be launched in priority areas which will allow for a revamping of the credibility of the Nigerian state, the promotion and fulfilment of an enhanced social contract, and the rebirth of the national identity.

3. The adoption of broad socio-economic measures that enhance our capacity to fight insecurity must be done at the same time as investments in reinforcing the deterrent capacity of the state through its armed forces, security agencies, and police authorities. Authority and legitimacy coupled with deterrence and rapid response go hand in hand, just as we must better design and interface economic policies with broad social objectives and goals of political inclusivity towards a well-defined outcome, namely, sustained peace, stability, and progress of our country.

4. Let there be no doubt: For the economy to serve broader social and political purposes that enhance human and state security, stem poverty, and promote national prosperity, my agenda for Nigeria encompasses attention to questions of productivity, diversification, domestic value addition, investments in and incentives for research, development, and innovation, and the expansion of domestic revenue mobilisation, among others.

5. Considerable work is already ongoing on the upgrading and expansion of our infrastructure and one of my prime objectives would be to accelerate this both through public investments and partnerships with the private sector whilst simultaneously ensuring that we enforce accountability and get much greater value for money.

YOU MAY ALSO LIKE:   I’ve ‘Resigned’ From Impregnating Women — 2Baba reveals

6. By the same token, a major rescue and investment programme for the education sector, the health system, the civil service, and the local government system will be launched to re-orient each of them for the task of overall national development, and progress and prosperity.

7. I fully understand that we cannot secure our prosperity without ensuring that our agricultural sector is able to deliver self-sufficiency in critical food markets, feed our efforts at agro-allied industrialisation and thus meaningfully enable the transformation of the unemployed into gainful employment, reinvigorate the rural areas, foster the coordinated expansion of commodity exchanges, and boost the flow of foreign exchange into the economy.

YOU MAY ALSO LIKE:   Bandits Goes Wild in Niger, Kill One, Injure One, Kidnap 11

8. No vision of national prosperity however impeccable or programme of national transformation however comprehensive can deliver the outcomes desired without attention to the planning system of government writ large. We must build on recent successes in restoring our national planning system and statistical capacity in order to open new, forward-looking approaches to development management that are research and data-driven.

9. As part of this commitment, a holistic approach to decentralisation will be embraced and institutionalised so that government and its services are brought closer to the people. Our programme of decentralisation will also feed into the goals of a stronger, more united, and stable Nigeria, outcomes which are not only good for our domestic prospects but which will also benefit West Africa, the rest of the African continent, and a troubled international multilateral system.

10. In the course of this campaign, I will adhere to the highest standards of decorum, decency, and respect that Nigerians expect of their leaders. Also, I pledged to bring to full fruition his promises to the pride of all Nigerians and the admiration of the world.