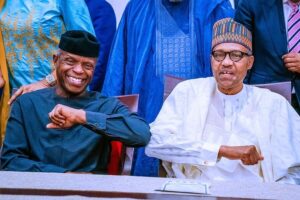 A group canvassing for Vice President Yemi Osinbajo has called on President Muhammadu Buhari and the ruling All Progressives Congress (APC) to consider adopting the vice president as the party’s presidential candidate in the forthcoming 2023 general elections.

The group, The Progressive Project (TPP), made the call in a six-point declaration during a press conference at its campaign office in Abuja on Wednesday.

They held that the Vice President was one of the very few Nigerian political aspirants who will not turn electoral victory into an opportunity for wealth accumulation and Nigerian women will give him resolute backing for the 2003 presidential elections.

The women wing of the group, National Coalition of Women for Osinbajo, led by their chairperson, Hajia Rabi Dauda, also declared support for the vice president stressing that the 2023 general election will be a decisive turning point for APC and the entire nation.

The coalition strongly affirmed “Nigerian women’s utmost confidence in the candidature of Professor Yemi Osinbajo as a people-focused leader with the right intellectual capacity and innate leadership qualities to move Nigeria forward, with an emphatic attention to women progress and development.”

According to the women’s coalition, various parameters of assessing genuine leadership puts Osinbajo ahead of other presidential aspirants.

“The 2023 general election will be a very decisive juncture in the history of Nigeria and our great party, APC, has an epoch-making responsibility to move the nation forward by deepening democracy, considering affirmative action for 35 percent representation for women and accelerating general development.

“Without any iota of doubt, we believe that the emergence of Prof Yemi Osinbajo as the 2023 presidential flag-bearer of the APC will give Nigeria the opportunity to realize these lofty collective progressive aspirations.

YOU MAY ALSO LIKE:   Breaking: First Batch Of Nigerians Arrive From Ukraine

“It is important that Nigerians make a clear decision by choosing a leader known to be ready to work for the development of the future and the betterment of the country rather than joining those politicians who have tendencies to exploit public office as an opportunity to fill their pockets.

“Nigerian women believe in the candidature of Prof Yemi Osinbajo, a man whose credibility, objectivity and intellectual capacity has been proven over time.

YOU MAY ALSO LIKE:   See The Heavily Guarded Cotonou Prison Where Igboho Will Be Held For Weeks

“Seriously, there is need for effective steps to be taken to ensure that those who engaged in plundering state and federal coffers in the past are not allowed back into governance roles where trust and integrity really matters.

“Along with government, our party leaders and other stakeholders in our great country Nigeria, we must all contribute to deepen democracy, encourage productive dialogue, mobilize women and youth for optimal participation in our democratic processes and ensure free and fair election,” the coalition’s leader, Hajia Rabi Dauda added.