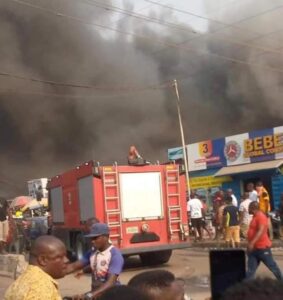 A spare parts’ building – CETECH- in the Ladipo area of Lagos State, Southwest Nigeria, was on Wednesday afternoon gutted by fire.

Societygazette reports that although no life was lost, several items and valuables worth millions of Naira were destroyed.

The fire started around 4 pm. While its cause is yet to be ascertained, some residents linked it to electrical faults.

Scores of residents, workers gathered at the entrance of the affected building, counting their losses and lamenting the disaster.

Others joined the firefighters to battle with the inferno while offloading goods in the building.

Media reports indicate that between 2019 and 2021, Nigeria experienced severe fire incidents, leading to 79 deaths out of 68 fires recorded in 18 months. Thirty-one of these were market fires and the losses are still being counted.

YOU MAY ALSO LIKE:   How 6 Finalists Will Emerge from FirstBank’s Sponsored The Voice Nigeria Season 3 Second Live Show
Ladipo plaza 2022-01-19
Oluwasegun Adesuyi
Share