Home / cover / 2023: How Wike Reacted After Tambuwal Stepped Down To Support Atiku

2023: How Wike Reacted After Tambuwal Stepped Down To Support Atiku 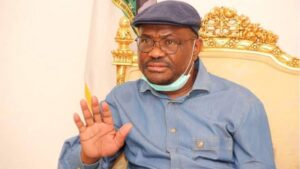 According to some reports last minute intervention of some stake holders in the party worked in favor of Atiku.

At 8: 34pm, the governor of Sokoto State, Aminu Waziri Tambuwal stepped down for Atiku, Legit.ng report.

Party sources said he withdrew from the race to support Atiku following the intervention of some elders who feared that should Wike pick the ticket, the ruling party would once again secure the presidential seat in 2023.

Before the commencement of the primary some Northern elders had met with Atiku, Saraki, Tambuwal and Bala Mohammed but the talks had failed as the aspirants had insisted on participating in the election.

However, the elders resumed the push at the venue of the event.

Tambuwal later gave in and withdrew from the election.

YOU MAY ALSO LIKE:   BREAKING: EFCC Arraigns Mompha For Fresh N6b

It was observed that aspirants from the South, except Udom Emmanuel, were all seated together, just as other contenders from the North were camped together.

Governors of Rivers and Benue states, Wike and Samuel Ortom respectively were seen having conversations shortly after Tambuwal announced his withdrawal from the race. Soon, another aspirant, Ayodele Fayose, also joined in.

YOU MAY ALSO LIKE:   ADEDUNTAN SUSTAINS HIS WINNING STREAK, PIONEERS LEADERSHIP EXCELLENCE IN BANKING

Wike, who was cheerful before Tambuwal’s shocking announcement, frowned throughout the exercise.

The Rivers governor looked exhausted while ballot sorting was ongoing with Atiku’s name ringing in the air.

Coming second to Atiku was Wike who polled 237 votes. Nwachukwu Anakwenze, an aspirant had pulled out of the race around 5pm to support Wike.

2023: How Wike Reacted After Tambuwal Stepped Down To Support Atiku 2022-05-29
Oluwasegun Adesuyi
Share

Tags 2023: How Wike Reacted After Tambuwal Stepped Down To Support Atiku