2023: I Don’t Care Who Becomes President…My Preferred Candidate May Be Eliminated — Buhari’s Confusing Position On Successor 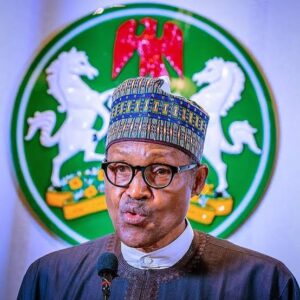 Viewers who watched President Muhammadu Buhari’s interview on Wednesday must have been bemused after the president gave two contradictory responses about his preferred candidate for 2023 presidential election.

Buhari spoke about the economy, insecurity, his reservations about the recently signed 2022 budget and his refusal to give assent to the Electoral Act Amendment Bill, amongst others, during the interview aired by Channels TV.

But when asked about who he prefers to succeed him in 2023, the president said he had no favourite candidate and isn’t concerned about who emerges his successor at the polls.

“I am not interested in who becomes the presidential candidate of the ruling All Progressive Congress (APC) as I am open to the emergence of anyone. Let him come, whoever it is.

“The only important thing (is) I made sure that on record, nobody should ask me to come and give any evidence in any court. Otherwise, whoever it is, he will be in trouble. Because all the important things are on record. I made sure about that. Important issues are all on record.”

In the same breath, the president admitted having a favourite candidate but said he prefers to “keep it (a) secret”.

“I wouldn’t (reveal my preferred candidate) because the person could be eliminated if I mention it. I better keep it secret,” said Buhari.

Speaking further on why he declined assent to the Electoral Act Amendment Bill, the president said it was undemocratic to impose direct primaries as the only option for political parties to elect candidates for elections.

YOU MAY ALSO LIKE:   2023 Presidency: What Tinubu Means By 'Fight Dirty' - Media Aide Explains

““We must not insist that it has to be direct; it should be consensus and indirect,” Buhari had said, adding that he would sign the bill if indirect primaries and consensus candidates were added as options.